Take a mountain vacation with Sloane Taylor, Rob Graham and Celina Summers from Aspen Mountain Press in the Realms of Love Chat Castle Monday June 23. There are some hot releases out from these folks. Read about them below and then join us for an hour of fun and frolic Monday at 9 PM EDT/ 6 PM PDT. Of course, there will be downloads of eBooks given away to lucky chatters! Realms of Love is the place for romance writer chats!

Celina Summers: The Asphodel Cycle: The Gift of Redemption After the defeat of the Duke de Spesialle’s armies, Tamsen de Asphodel finds herself weakened and ill. The toll of the magic she called has ravaged her body, but the demands of the Elven Realm and the kingdom of Ansienne call her to continued duty. With Brial at her side, she ignores her fragility and dives headlong into the political turmoil of both nations. Unfortunately, her uncle Spesialle is not finished with her yet. When she finds herself at his mercy, she must gather all of her wits and courage to combat him. And when the gods demand an answer to the question What gift can buy the redemption of the Elves? Tamsen must decide if she is brave enough to give the right answer.

Rob Graham: Gillian’s Place: Fatima, The Orange Slip, Bill and Ruby, Ruby and Bill & Dinner Date Come on in and have a drink. Gillian’s place is the right place to be to hear some interesting stories of love gone wrong and right.

Sloane Taylor: Teddi Turns On: No one’s going to take advantage of Teddi Howard again, including the Munich tour operator who screwed her over when he reneged on their contract. Her only option is to face the little weasel. But nothing stands in the way of prominent, German businessman David Stiefle, especially a woman.

Hope to see you there!

Sloane Taylor
Sweet as Honey…Hotter than Hell
www.sloanetaylor.com
Posted by Sloane Taylor at 8:01 AM No comments:

Email ThisBlogThis!Share to TwitterShare to FacebookShare to Pinterest
Labels: A Night to Remember 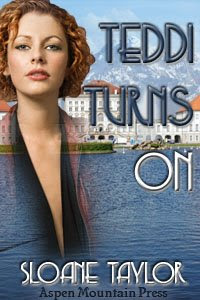 
BLURB:
No one’s going to take advantage of Teddi Howard again, including the Munich tour operator who screwed her over when he reneged on their contract. Her only option is to face the little weasel.

Nothing stands in the way of the prominent, German businessman David Stiefle, especially a woman. No way is he ever getting involved, even if she is the sensual Mrs. Howard.

EXCERPT:
David Stiefel’s eyes kept track of the copper-haired female while he rolled up the sleeves of his striped shirt. The woman was oblivious to the stir she created as she strolled through the crowded O’Hare Airport Business Class Lounge. He stroked an index finger over his lips and studied her sleek figure in form fitting slacks. The appealing rear view was too good to miss. The pleasure of not seeing a panty line forced him to shift in his chair to adjust for the sudden pull in his jeans.

She bent over, hung her jacket across the chair back, and glanced over her shoulder at him. Their gaze held as a smile tweaked the corner of his mouth. He crumpled the wrappings from his beef sandwich and knew he’d just been offered dessert. Now all he had to do was make his move.

As his good luck would have it, right there on the floor, just a few meters away was an airline ticket dropped by some unsuspecting person. Ha, unsuspecting, his Aunt Hilda. He knew that delicious looking woman had done it as a ploy to meet him.

He stood and paced off the few steps, never taking his eyes from her. He stooped, scooped up the packet, and walked the few extra feet before he glanced at the name printed in bold marker across the front. When he held it toward her she fumbled with her purse and carry-on as if she didn’t know she’d lost such an important set of documents. Very cool.

Standing in front of her, he leaned down just enough to catch her scent. Shalimar. His favorite.

“Bitte, Frau, are you missing something?” He liked the way her eyes widened as if she were surprised. She was good.

“Thank you.” She reached out a slender hand. Thank God there wasn’t any of that garish nail art so many women seemed to prefer.

There'll be plenty of celebrating tonight!

Sloane Taylor
Sweet as Honey…Hotter than Hell
Posted by Sloane Taylor at 11:29 AM No comments:

Come on over to Eternal Press Readers http://groups.yahoo.com/group/EternalPressReaders/ for the finest and hottest books you'll find on the internet.

Join us for excerpts, PRIZES and more!

We're going strong all day and into the night.