Spellbinding author Robert Appleton is here today with his new novel THE MYTHMAKERS. The powerful cover was designed by talented artist Kanaxa. I do believe she outdid herself.

Here's what Rob has to say about himself:
I'm a native of Bolton, England, I write science fiction and paranormal mysteries. 2009 is my second year in the rollercoaster world of e-publishing (hint: don't look down, except when upside down).

In my previous lives, I served (smuggled) popcorn in a cinema, mis-filed much as a public servant, and walked away with a Film Studies degree. I've visited America, Greece, Spain, Scotland and other alien planets.

To date, my publishers include Samhain Publishing, Eternal Press, Lyrical Press, Club Lighthouse Publishing, Uncial Press, and Damnation Books. My ambition is to have an ambition. So far, it's all with the tide, baby. 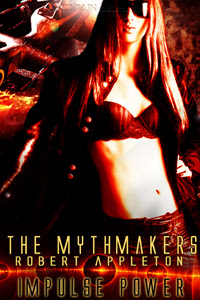 BLURB:
For Captain Steffi Savannah and her crew of deep space smugglers, life has become little more than a dogged exercise in mere survival. Their latest disastrous heist ended with another dead crew member—and no place left to hide. She’s even finding it hard to dredge up any excitement over the giant, crippled ship that appears on their radar, even though it’s the salvage opportunity of a lifetime.

They find that it’s no ordinary alien vessel. It’s a ship of dreams, populated with the last remnants of Earth’s mythical creatures. Including the blond, built, mysterious Arne, one of a race blessed with extraordinary beauty—and few inhibitions. Though he won’t tell her exactly what he is, in his arms Steffi rediscovers something she thought she’d never feel again. Wonder, love…and hope.

It isn’t long, though, before the Royal guard tracks them down, and Steffi and her crew are faced with a terrible decision. Cut and run. Or risk everything to tow the ship and her precious cargo to safety.

EXCERPT:
There had to be easier ways to make a living.

Steffi Savannah loosened her jaw with a gummy roll of her mouth, then shook her head to stay awake. The stars wheeled at a dizzying clip. She ducked lower into her magnetic boots, but her quads ached from crouching. The dark purple flame of her cutting torch ballooned and dripped behind the tinted welding shield in her hand. It was taking too damn long. She’d guessed at five minutes to cut the metal debris loose—fifteen minutes ago. Bright molten shards spiralled away into space as the Albatross rifled through nothingness on her way to nowhere. “Come on, you bitch,” she urged.

The two chasing ships were gaining. Once mere pinpricks of light against the dull grey cloud whirls of planet October, they now had necks and glassy beaks and shiny metal wings that reflected the suns’ amber. And an arsenal of major firepower ready to annihilate the Albatross.

“Nearly there,” she replied. “Don’t wait for me. Get inside if you’re done.”

“Get below. Tell McKendrick to light the candle as soon as I close the hatch behind me.”

The weight of resignation in his parting syllable tumbled and echoed deep inside her. She’d always hated being alone outside. Having a man to keep her company, one who’d do anything for her even though she didn’t love him in the least, was a safety cord no rig could best. She looked round but he’d gone. The unique brass hull had been sleek once. Now it was dented and greening and it barely reflected starlight anymore. Laser scarring and rivulet depressions where the seams had started to buckle groaned with old age.

Steffi shot a breath from her nostrils and gripped the cutter’s blunt handle. It rocked and rolled as the mangled wreckage lifted toward her. Dammit. She had to let go of the torch to duck. McKendrick had punched the throttle early, as soon as the ship’s rolling had stopped. Tons of twisted metal almost took Steffi’s head off as the Albatross gathered speed. Ducking backward, she lay flat on the hull. Only her knees pointed up, as her magnetic boots were still clamped. The wreckage lifted like a silver crown of thorns away, ahead of her into space. She hoped like hell the bastards would fly into it.

“Sorry. Was worried about you, Cap.”

She climbed up his arm and shoulder and shook her head. “Of all the dumb goddamn…I told you to tell McKendrick to wait ’til I was inside.” She gave him her hardest shove. It made him blink. “I came this close to being ripped in half,” she added, demonstrating the distance between her forefinger and thumb. “Now get your dumb hulk ass below and help Flyte with the Psammeticum coils.”

She wanted to hug him for being a loyal puppy, but he needed to learn what an order meant. Bo adored her. He’d often said so in bed. And a part of her was very fond of him—the sex and the sweet talk had brightened up many a dull evening—but no more than that. She knew it was pity more than love that kept her close to him. Pity for his dumb, harmless nature; for him being an orphan with no hope of anything but a mining or muscle job; and for him not minding being used for sex whenever she wanted it.

But this time, his mindless devotion had gone too far.

Sloane Taylor
Sweet as Honey...Hotter than Hell
www.sloanetaylor.com
Posted by Sloane Taylor at 8:25 AM