ON THE EDGE WITH RICK R. REED

I'm excited to have Rick R. Reed back with us, discussing his newest print release ON THE EDGE. This collection of strong stories is filled with an emotional depth a reader rarely experiences. It's a rewarding read and one you won't want to miss.

Now, a little from Rick;

This book is especially for you if you're one of those people who just doesn't cotton to the idea of an e-book and prefers the look, smell, and experience of a real print book. ON THE EDGE collects eight of my stories that were previously only available in electronic format before. Check out the descriptions of each story below (titles are hyperlinked so you can go to their original publisher page, where you can read excerpts, see reviews, and a more detailed synopsis). 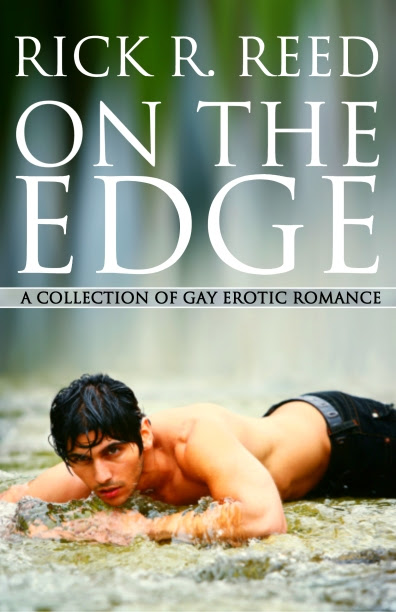 Synopsis
In Rick R. Reed’s haunting, mesmerizing, suspenseful, and romantic world, his gay male characters live on the edge, often literally as well as figuratively. In this new collection, you’ll take a wild ride with some of literature’s most unforgettable characters. Along the way, you’ll be moved—to tears, to laughter, to uneasiness, and sometimes, to arousal. As Bette Davis once said, “Fasten your seatbelts. It’s going to be a bumpy night.”

Previously available only in electronic format, these eight stories of Gay Erotica and Romance have now been combined for a paperback edition! Included are the tales...

SUPERSTAR A story about promises made, promises broken, and dreams unfulfilled. Yet ultimately, it’s about realizing that love can come along when one least expects it—and in the unlikeliest of places.

THROUGH THE CLOSET DOOR A tale that brings to painful life the consequences of coming out of the closet when you’re married. Gregory’s mask is slipping, pulled down by the allure of a handsome neighbor and the demands of a desire that only gets louder the more he tries to quiet it.

RIDING THE EL AT MIDNIGHT When the gorgeous and twisted Mark boards a northbound el train, he is looking for love in all the wrong places. Finding Julio aboard that same train, Mark thinks, is the answer to his dreams. But are his dreams nightmares?

FUGUE SLIP into the dungeon playroom of a master and his boy. But in the boy’s mind, a dream state takes him places the master could not imagine...places where the established order turns upside down.

INCUBUS Two men, one predator, and a violent crime equal a journey into hellish nightmare territory. This tale merges horror with a tragic love story and the result is...chilling.

MAN-AMORPHOSIS I awoke one morning from uneasy dreams to find my penis had transformed itself into a vagina... Thus begins the story of a very unusual day...

NO PLACE LIKE HOME Trannies and Psychos and Bears...oh my! Burl discovers—in a hilariously bizarre quest—that there really is no place like home.

POTTERY PETE One long hot summer. Three gorgeous men. And a burning triangle set down in the middle of a factory filled with sweaty men with bulging biceps.

Thank you, Rick, for sharing your wonderful books. As always, it's a pleasure to have you visit us. :)

I'll be back next week. Until then...

Sloane Taylor
Sweet as Honey...Hotter than Hell
www.sloanetaylor.com
Posted by Sloane Taylor at 7:52 AM