WE ARE OVER THE MOON!

Robert Appleton and I are toasting each other across the Pond. We just received the awesome cover for our about-to-be released mystery sci-fi CLAIRE DE LUNE and wanted to share it with you. Trace Edward Zaber designed it and captured the book's theme to perfection. 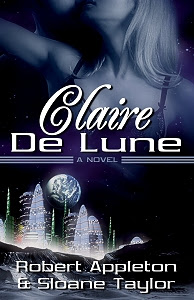 Cocky young detectives Gerry Rappeneau and Sebastian Thorpe-Campbell arrive at the premier lunar resort expecting a week of eye candy and long massages. With a half-billion-credit purse up for grabs, this year’s pageant is the focus of a hundred worlds. And beauty isn’t the only thing in the eye of the beholder.

One contestant, Evelyn Lyons, is attacked and her assailant killed. Surely a simple case of a stalker gone mad, as nothing bad ever happens at the Selene contest. So the brochure says.

The closer Gerry gets to Evelyn, the more he is convinced she’s hiding something. His meticulous character sparks with her wild, sassy nature, and they embark on a torrid affair. Their forbidden romance isn’t the only thing set to ignite in Pont de Reves.

Sebastian’s infatuation with demure Claire Villiers, another contestant, threatens to put all four of them in harm’s way.

Rob was the mastermind of this book and I am forever grateful he included me. Check out his website and blog Mercurial Times to learn more about this talented genius.


I'll be back next week with another surprise from P.A. Brown. Until then...

Sloane Taylor
Sweet as Honey...Hotter than Hell
www.sloanetaylor.com
Posted by Sloane Taylor at 7:42 AM