INSIDE THE MIND OF RICK R. REED

Rick R. Reed is a talented author secure in his genre. When asked what inspired him to write TALES FROM THE SEXUAL UNDERGROUND, Rick was happy to share. 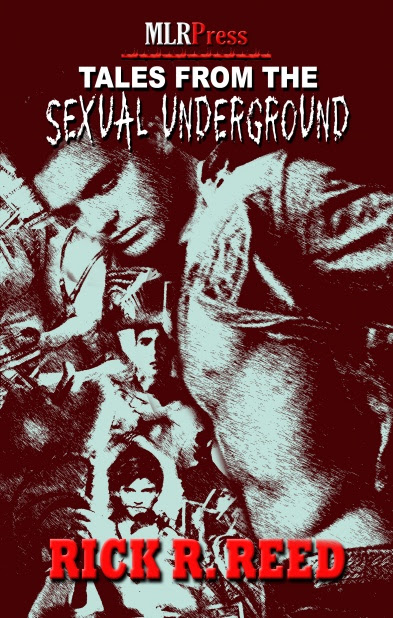 EXCERPT
He knows me, so he knows the best time is a quiet one. We stay in. Dinner, drinks, and of course, the last part, the best part.

He starts off casually, wearing a pair of faded Levis, a white T-shirt worn soft, bare feet, hair still damp from the shower. There's a CD playing, low, maybe Oscar Peterson conjuring up Gershwin from his piano. He's got a few candles lit, but nothing scented. The air in his apartment is clean, with a trace of the soap from his shower lingering.

We sit on the couch and he makes me a drink. He already knows what I like, a dirty martini made with vodka, heavy on the dirt. We laugh about how I like things dirty, but not too much. We keep our minds out of the gutter, at least for now.

After the drinks, the music, the light fading to purple outside, we move to the dining room. Old oak pedestal table, mismatched chairs and cream pillar candles...used before. He makes a light meal, because he knows that later, we won't want anything too heavy weighing on us. A simple salad, arugula, red onion, plum tomatoes, drizzled with olive oil and balsamic vinegar. There's a chicken breast, poached in broth, lemon juice and walnuts, some rice. Strawberries with sour cream and brown sugar for dessert. A glass or two of white wine, an Alsatian Riesling.

We linger over the dinner, slow; the candles burn down. The sky outside fades from purple to navy blue, a glow to the south...city lights. We move to the bedroom, undress slowly.

He knows how to touch me. Knows where to make the pressure slippery and where to make it rough. Knows when to move slowly, when to increase the tempo, and when to slow it down again...he doesn't want things to end too quickly. He knows that my nipples are sensitive, and toys with them just hard enough so I will feel the ghost of his caress in the morning. All the while, music, orchestrated to ebb and flow, a soundtrack to our passion. We start off with Bach, Mendelssohn, end up with Crystal Method and Prodigy. Romance to filth. And he tells me, the whole time, about past lovers, knowing it excites me as much as his touch. Like the music, he starts off slow and romantic, telling me about his first love, Ron, how they were playful, in love, existing only for each other...so young. He tells me about a particular New Year's Eve, in a darkened bedroom in Florida, high on pot and champagne, bringing each other the most incredible gifts. But as our passion rises, so does the depravity. He moves on to orgies, nights with strangers fueled by Ecstasy, a frantic, furtive coupling with a Northwestern student in an alley by the el tracks one night in August, fucking each other sweatily while the train crackled and roared above, its human cargo oblivious. He tells me about backroom sex, the smell of poppers, leather, cum and spit in the air, groping, being groped, connecting with shadows. He tells me everything, moving faster and faster, until even his tales and touch blur, and I offer up my seed; it covers my belly in viscous arcs.

And I roll over and look at him...in the mirror. He is me.

I'll be back Friday with a new release from awesome author Robert Appleton. Until then...

Sloane Taylor
Sweet as Honey...Hotter than Hell
www.sloanetaylor.com
Posted by Sloane Taylor at 7:55 AM