What Unknowns Lurk in Your Child's School?

Samantha Combs is a Southern California author who enjoys writing YA paranormal romance and supernatural fantasy, along with creating books for the Middle Grade audience.

When Samantha's not writing, she spends time with her husband and two children. Her guilty pleasures include reality television, the Food Network channel and shoes. Samantha truly believes she can accomplish anything if she has the right pair of shoes.

I love writing and I am in awe of the technological advances of our lives. E-readers and similar gadgets are bringing the written word to a generation that might never have discovered books otherwise and every time I see a kid pick one up to read something it fills me with joy to be a small part of that process. If a child can connect with literature because he or she did so electronically, a connection still was made. I am excited to see what our world has in store for literature and excited to be along for that ride. 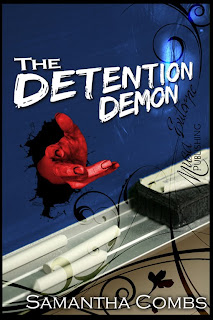 A raggedy group of delinquents, thrown together by circumstance, get the opportunity to prove if rumors about the detention teacher being less than human are true and discover it doesn’t take years of friendship to bond together and overcome evil.

BLURB:
Wayne is a Junior High school boy who just got detention for fighting in school to protect his longtime best friend, Gumby. But recently, there have been stories about detention. Kids have mysteriously disappeared, creating creepy rumors about detention class. Now, Wayne finds himself trapped in there with school bully Bubba Dugan. Keeping his distance from Bubba won’t be Wayne’s only problem. In fact, those rumors about the detention teacher don’t seem like stories at all.

With his best friend Gumby, a crew of delinquents and a surprising late addition, a pretty cheerleader harboring a secret crush, Wayne and his group of misfits will have to band together to outwit the detention teacher. He’s protected his best friend from harm his whole life…..but, can he protect him and everyone else against something that might not even be human?

EXCERPT:
If Mr. Levi was scary and intimidating in the stories circulating around the schoolyard, I decided right then and there, it was justifiably so. He was probably the freakiest person I had ever seen in my life. Oh, he was dressed normal enough in brown corduroy pants and loafers, and a regular white button down shirt with some kind of funky vest over it—the same outfit half the male teachers in school wore. He wasn’t too tall, he didn’t look like he worked out, and he had short hair with a big bald spot like one of my mom’s old boyfriend’s on top. Everything seemed reasonable and ordinary until you got to the face. Here was where we took a sharp turn out of Normalville and screamed headlong into Freak Town. Mr. Levi’s face featured a long, hooked nose, barely a slash of a mouth and his eyes were sunken back in their sockets. They didn’t have any color to them. They were actually black; so black that I had to look hard to make sure there were any eyes in the sockets at all. I don’t know how long I stood there looking at him because suddenly his papery thin eyelids closed and opened over those black, sunken holes, and the thin red slash parted and Mr. Levi spoke his first words to Gumby and me.

“You must be Marsh and Spencer.” The raspy, crunchy quality of his voice reminded me of the sound the piles of dried leaves make when I rake them in November in the front yard, all brittle and breakable. I could see cracks in the corners of his lips, like he hadn’t spoken for a long time. Next to me I felt Gumby trembling, but I wasn’t about to give this creep the satisfaction. I’d promised my mom I was just going to do my time and be out of here, and that was exactly what I was going to do.

Connect with Samantha Combs on her Fan Page, blog and Twitter. You're always welcome to email Samantha.