It's wonderful to make new friends and even better to share them. Today, I'm doing just that. Please allow me to introduce you to a woman with more balls than most men.

The name’s Maxie Briscoe and I am a werewolf...

That’s right, a real live, full moon-loving, Halloween icon. It’s hard out here for a girl like me. To survive, I hide my true self and act the part of a normal human, all while discreetly indulging the Beast within. Talk about walking a narrow ledge. And that’s not even the worst part. Sex is. You see I can bench press a pick-up truck and that spells disaster in the bedroom. You can’t have any real fun knowing you might accidentally crush a lover while in the throes. Kind of kills the mood. 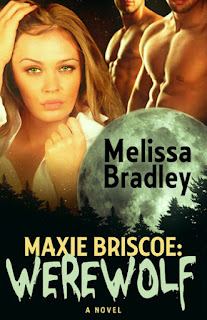 When a friend’s murder shatters the careful existence Maxie has carved out for herself, she comes face to face with Damien and Noah, two of the hottest men she’s ever laid eyes on. And it only stirs her Beast and turns her on more when she realizes they’re hot for each other. They’re also the first werewolves she’s run across since her own conversion. The attraction between the three of them is instant, but complicated, and the sex...explosive.

Too bad there’s a killer out there with his sights set on her...

EXCERPT:
Maxie meets Damien and Noah for the first time…

They materialize from the darkness, hunters intent on their prey. Me.

My breath hitches, the animal inside rippling beneath my skin. I’m nervous, but I refuse to let them see. This bitch rolls belly-up for no one. I stride onto my front porch, prepared to defend my territory. Dressed in loungewear, I am hardly the picture of a strong alpha female, but you go with what you got. I look them both dead on.

I fold my arms over my breasts. “What do you want?” I growl, my voice a low rumble.

“We’ve come for you, little one.” With a voice like muffled thunder, the taller of the two moves forward onto my lawn. Twisted steel with sex appeal about sums him up. His dark hair is pulled back in a tail, tee-shirt molded to his cut frame.

My nostrils flare, catching his scent, fresh like a mountain spring at first thaw; my female parts quiver in anticipation. I want to coil myself around him like a python on a Kapok tree, hugging
every hard inch of flesh. Ruthlessly, I shove down the urge. It’s dangerous. Ulterior motives are written all over the two of them, and I just know one of those motives is to dominate me.

“It took us a long time to find you, Maxie.”

The whisky baritone draws my attention, and I watch the other one emerge, lean and graceful, his muscles liquid precision. Definite hotness is woven into the male half of the werewolf
genetic code. His scent is warm and dark, like night in a jungle. My nipples bead with excitement as he lopes toward me, brushing past the larger wolf. He stops at the base of my stairs, conqueror
etched in every line of his body. This is definitely the alpha of the pair.

“Didn’t know I was lost.” I widen my stance, ready to spring. If he’s looking for a challenge, he’s got one.

He smiles, teeth bared, the faint light from the scimitar moon exposing the predatory glint in his eyes.

I can feel the hunger resonating through them, matching my own deep desire.

“We can smell your craving, little one,” the taller one rumbles as he joins his partner.

I hate arrogant assholes. “Is this the part where I’m supposed lie back, spread my legs and say, ‘Do me like Red Riding Hood, you Big Bad Wolf’?”

They chuckle in that knowing, masculine way, the sound like tropical waves lapping along my insides, teasing and inviting.

“She’s more than we imagined, my friend.” The dominant wolf smiles over his shoulder at the other one as he starts up the first step.

“Hold it right there, Romeo,” I snap.

He stops, huffs out a breath and moves back to his original position. “The name is Damien Black. And this is Noah Rayburn.” He jerks a thumb toward the larger guy who inclines his head with a gleaming look in his eyes.

They stand there, watching me, probably wondering when I’m going to quit being so difficult and invite them inside. Maybe I will and maybe I won’t. All depends on their explanations.

Melissa Bradley grew up in a book-loving, storytelling family on Chicago’s southeast side. Some of her fondest memories are of her father regaling her with tales of giants and goblins. She has a passion for stories of history, romance, adventure, fantasy, science fiction and horror. Melissa's favorite places include bookstores, libraries and movie theatres. You can find out more about Melissa and her writing by visiting Melissa's Imaginarium, Facebook and Twitter.