Not only is my author friend Sara Daniel a terrific writer, she's also one dynamite baker. Sara is sharing her special Fourth of July dessert. I guarantee you'll love it! 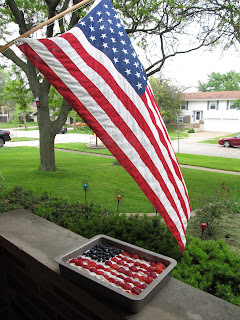 Nothing beats Independence Day for showing our pride in our country. Flags wave proudly, and red, white and blue are suddenly displayed on every piece of merchandise in the local discount store.


While I don’t have flag plates, napkins or—God forbid—a star-spangled bikini, I love bringing out my once-a-year crafty side to make an American Flag Cake for a cool patriotic treat.

So to satisfy your sweet-tooth I offer you my easy and delicious recipe.

Beat sugar into butter 2 tablespoons at a time until light and fluffy. Add vanilla, then eggs one at a time. Mix in remaining ingredients.

Bake in a greased and floured 9 X 5 pan for 1 hour. Cool completely.

To Assemble American Flag Cake
Cut pound cake into slices and lay across the bottom of a 9 X 13 pan.

Cover cake with a smooth layer of Cool Whip.

The last step is very important - Thank a member of our Armed Forces and/or a Veteran, and share a piece of patriotic cake.

Here is a look at my wounded military hero from the Wiccan Haus series: 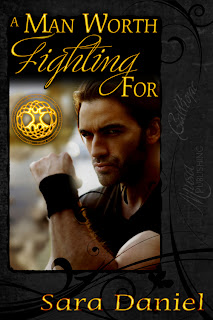 He has nothing left to offer. She's determined to show him just how much he's worth.

Shot by a member of his military team, Justin Lawson retreats to the Wiccan Haus. Holly Walters refuses to accept her boyfriend's out-of-the-blue rejection without an explanation, even if getting the answers forces her to be trapped on a bizarre island for an entire week. She's going to use every minute to work Justin out of her system once and for all. Justin's body and spirit begin to heal under Holly's loving ministrations. As she talks about never seeing each other again, he realizes he never wants to let her go. But the rogue assassin who had gone after Justin before is after him again. Before he can fight to make Holly believe in their love, he'll have to fight for both their lives.

EXCERPT:
“How did you hurt your knee?” Holly asked.

That wasn’t very comforting, considering he was in the military and always going off on missions that he couldn’t give her any details about. “Did you fall and break it?”

“Bullet shattered it.” His words were clipped.

She flinched, wanting desperately to reach for him, hating to think of the pain he’d been in, the pain she’d known nothing about. “And how long before or after this happened did you send me an eight word break-up text?”

“About seventy-two hours after.”

She immediately knew she’d been right not to take his text at face value. The self-destruction of a client and the week of lost work were worth it. She’d needed this explanation. More than that, it proved there was still hope for them. “So you conceivably could have still been under the effects of anesthesia.”

“But you were on pain medication for sure.”

“Don’t make excuses for me. I was an ass. I broke up with you, and you deserve better.”

To read more about The Wiccan Haus: A Man Worth Fighting For please click HERE.

Be sure to subscribe to Sara’s newsletter for updates on her latest books and contests.

Have a Safe and Happy Fourth of July! I'll be back Monday. Until then...

Sloane
Posted by Sloane Taylor at 9:26 AM