with DEAD Hot, a new book in her best selling DEAD series. 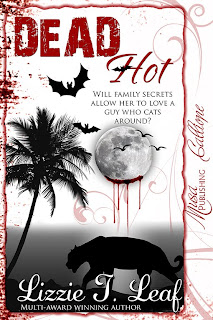 Will family secrets let her find love with a guy that cats around?

BLURB:
Sharla Gomez’s dream encounter with the man she’s lusted over for months turned into rain-soaked nightmare. Her hopes of love and passion have gone to the dogs. Being a shifter is hell, especially when you’re a Pug/Chihuahua mix, or as some call the breed, a Chug. Even dogs don’t want to be told they’re so ugly they’re cute?

Dorsey Smith wants to get to know the exotic number-cruncher in charge of the strip club’s books. Just his luck she disappeared before he could ask her out for coffee. Instead of taking home the woman he lusts for, he takes home the small, drenched dog shivering in the rain. When he discovers the animal missing the next morning and he senses magic in the air. Has his safe haven been discovered and will his secrets be revealed?

Can two people with deep secrets discover the truth about each other and still find love. Or will the secrets and the evil lurking drive them apart?

Sharla Gomez clamped her lips tighter to stop the drool pooling in her mouth from running down her chin as Dorsey Smith lowered the case of beer off his shoulder. The sweat drenched tee-shirt clung across his back and the muscles under it rippled. She clinched her thighs together. In her dreams of the hunk nothing obscured the bare skin of this chocolaty delight and she could lick every inch.

"Oh Dorsey, I need a refill." One of the model type chicks clustered around the other end of the bar waved her glass and blew a wet kiss from her injected lips.

Dumb bitch thinks she looks sexy, but that puffed up mouth makes her look more like she kissed an offended beehive. Sharla swallowed hard to force back the bile. Hell yes I’m jealous! What wouldn’t I give to be one of the beauties that muscular bartender rushes to accommodate.

Instead, she had been blessed by the gods with her Mexican grandmother’s love of enchiladas, which also led to inheriting Grandma Gomez’s ass. From her German grandmother, Sharla got her large boobs that helped balance her ass. Those genetics also passed along her big blue eyes, but thanks to Oma Chen being an open-minded kind of gal who married a Chinese, they slanted. Yep, her life had been one big joyful event of teasing when she was a kid.

The combination of mixed genetics led to dreams of finding a male who appreciated unique, if not downright weird.

Weird is exactly where I fall when I start trying to explain I’m a shifter. Any normal guy will run like hell.

The only guys she’d come across outside her community who would appreciate the shifting detail were the really kinky ones. And kinky didn’t appeal to her.

But the guys back home didn’t appreciate her either. Most seem to think the teasing that had followed her through her school years needed to continue. That was the top reason she decided to try a big city once she had her accounting certification in hand.

She rested her chin in her palm and watched Dorsey’s interaction with the women. The sigh that escaped held all the longing she tried not to show.

"Girl, if the lust on your face could be bottled I’d make us both wealthy." Dovey slid onto the barstool beside Sharla, her gaze glued to the other end of the bar. "He is a yummy delight. If he were a chocolate milkshake, I could slurp him up in nothing fast."

"For being the club’s owner, you’re a dirty old woman. Comments like that can get you slapped with sexual harassment if the wrong person overhears."