The Temps are Freezing in the USA

but it's Hotter than Hell in Finland!

ON FIRE IN FINLAND, Book 1 of Melt the Ice series, is now available. 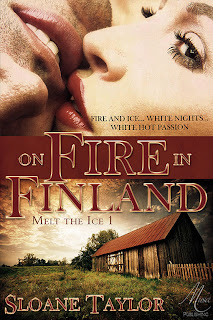 Scorching vacation sex is uppermost in jingle writer Kate Adam’s mind during her few days in Finland. That was the plan until her sports car dies on a lonely ribbon of country road. Her fantasies reignite when a delicious looking blue collar local crawls past in his beater truck.

Hot women and expensive cars are always a temptation for Rurik Jaacko, and his downfall. This time he must stay focused and drive right past the shapely woman stranded on the side of the road. But manners force him pull over. A few moments with Kate sparks a sizzling attraction that has Rurik offering more than a simple tow.

Roadside assistance spins into a white-hot ride as Rurik and Kate butt heads and burn up the sheets.

EXCERPT:
With his hard-on raging, Rurik watched her nipples harden and peak through the thin knit shirt. Obviously their heated exchange excited her. Or perhaps that he had taken control.

Women want to be dominated.

“There are times a man must take a stand with an unruly woman.” He caught her wrist and tugged her closer.

Color drained from her cheeks. But was that a sparkle in her eyes?

He stopped. What about the consequences? Either he would be a hero or Kate would pack her bags right after she rang the police.

“Yes, today I would.” He dropped onto a birch stump and, with a quick yank, upended her over his knees. Her perfect ass across his lap was too tempting not to continue.

“You’d better stop before it’s too late, buddy.” She turned her head and shot him a glare that could melt steel.

“It already is.” His palm came down with a resounding smack.

“Ouch.” She kicked her legs and wrestled beneath him.

He laid an arm over her shoulders to keep her in place and prayed he had made the right decision.

“Rurik, you are so going to pay for this,” she wailed, startling the birds from the trees.

And he would, right after he laid another open-palm swat on her firm ass.

She yelped at the contact. And he loved the sound. He might have been wrong about her being a spoiled, over-privileged woman, but a good spanking was in order to assert his authority. But he had better run like hell when he finally let her up because she was going to murder him.

His hand came down again, not quite as hard, and lingered on her sexy rear, petting away the sting. He ran his fingers along the curve of her cheeks hidden beneath the tight denim shorts. What did his handprint look like on her milky flesh? A stirring below his belt pressed against his fly and forced him to shift unsuccessfully under her weight.

She wiggled against his cock, enhancing his torture, and he failed to stifle the groan.

“Are you through beating me into submission?”

Her words came out breathlessly and reminded him of how she had purred against his balls the night before.

His hand smacked solid on her ass. She shrieked. And he loved her reaction.

He grazed a finger under the ragged edge of her shorts and inched up the inside of her thigh, seeking the heat beneath her thong. He hooked the lacy strap and tugged, drawing it tight against her labia. He released it and yanked up again. Her soft gasp traveled on a gentle breeze.

The musky scent of her arousal drifted up and encouraged him to please her. He glided a finger closer to her folds, teasing along the way with light pinches to her flesh, until he slipped inside her hot channel. Her wet pussy flexed against him, clenching—relaxing, and milking his finger like her mouth had done to his cock.

A whimper rose like a caress. Her hair tumbled free as she nodded.

He pulled out, then slid back in with two fingers and pressed firmer against her wall.

“Should I continue your torture or”—he massaged up and down until she bucked against him—“take you into the house and fuck you fast and hard?”

A soft gurgle washed her words away, and his balls tightened.