I'm excited to welcome back one of my favorite authors and friend Holley Trent. Holley's new release Back to Storafalt is a hot romance that's sure to make you tingle. I think you'll enjoy a peek behind the drawn shades in this small western town. 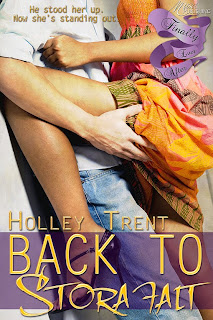 He stood her up. Now she's standing out.

The last time Justine Eklund had heard from Gray Voss was when he’d agreed to take her to her sister’s wedding. He stood her up. Twelve years later, he’s back in Wyoming as the new owner of Storafalt’s only pharmacy. He didn’t come alone, though. He brought along the small cowboy town’s best-kept secret—his preteen son, Danny.

Gray wants to pick up where he left off. He never stopped loving the beautiful rabble-rouser, and thinks she’ll fit seamlessly into his little family. Justine yearns to reignite that old torch, but she’s wary. She’s not convinced her high school sweetheart will stick around.

Storafalt’s only school is on a rapid decline, so Gray may have no choice but to return Danny to the life they built in Austin. If he goes, there’s no way Justine can go with them. Unlike Gray, she’s rooted too deeply to leave.

EXCERPT:
“This is casual. Having sex with people you’re not involved with is casual.”

“Are you on drugs?” She closed her eyes and cringed. Probably a bad joke to make to a pharmacist. “Don’t answer that.”

She finished buttoning her dress.

At that, he finally moved, slowly and sinuously toward his clothes.

She watched as if he were some sort of exotic cat she’d only ever seen in books.

He’d always been gorgeous, but he’d grown into that lankiness he’d had as a young man, and now he looked delightfully athletic. He certainly seemed strong enough, judging by the way he’d picked her up so easily and dropped her onto his desk.

He eyed her, his expression a curiously blank mask as he dressed. “I’m not on drugs, Justine. I meant it. Why couldn’t we pick up where we left off? Give me one good reason.”

Bells chimed at the pharmacy’s front door, and a boyish voice queried, “Dad? You here? I need more money.”

To see all of Holley's books, please click here or here.