S.S. Hampton Sr. is a longtime friend and a fun sparing partner. Stan's also a dynamite author. Today I'm excited to share his mainstream military fiction Better Than a Rabbit’s Foot that has earned a slew of 5 Star reviews. 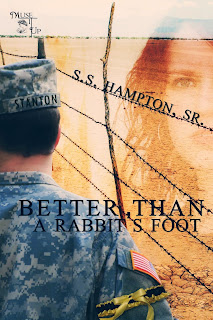 Most soldiers take a lucky charm to war, but what if you don’t know what works for you?

Sergeant Jerry Stanton is a young soldier serving in the War in Iraq. He is a gunner on a gun truck nicknamed “Lucky Bear,” one of those tireless workhorses that escort supply convoys from camps in Kuwait to destinations scattered throughout the war-torn country. In the early morning hours before a scheduled mission, a dust storm howls across his camp and threatens to bring convoy operations to a halt. Worse, the camp receives word that a gunner from his company was killed by an IED while on a convoy mission. Unlike most soldiers, Jerry doesn’t carry a lucky charm, but upon receiving news of the death of the gunner, he begins to mull over/ponder the merit/virtue of a good luck charm—only, what would work for him? Perhaps mail call will provide the answer.

Sergeant Jerry Stanton, an M4 Carbine slung across his chest, glanced at the dark form that trudged alongside him in the hot, early morning darkness. It was all the darker for the dust storm howling across the small camp, a dusty and sandy convoy support center, CSC, a mile south of the Iraqi border. He placed his hand over the tall Styrofoam coffee cup from the messhall that was open at all hours to serve those about to head out on a mission. He felt the itchy dust filtering down his back, along his arms, and coating his fingers.

In spite of his short time deployed to Kuwait, he had learned that dust storms were worse than sand storms; they were hot and itchy while the sand storms stung exposed skin and chilled the air. Breakfast was good but tasted flat, more due to the question of whether their mission would be a go or no-go because of the storm that roared out of the midnight darkness hours before.

“People like a happy ending,” the soldier repeated. He was a gunner from another gun truck as the squat, venerable M1114 HMMWVs, which were never meant to be combat vehicles, were called. He held up a rabbit foot that spun frantically in the wind and added, “I like a happy ending. Especially now.” They rounded the corner of a small building, actually a renovated mobile home trailer with a covered wooden porch lit by a bare electric bulb. The gunner pointed to a small black flag, suspended from a log overhang, flapping furiously in the wind.

“Oh shit.” Jerry sighed as a cold chill raced through him.

“It’s been there for an hour or so,” the soldier said as he enclosed the rabbit’s foot within both hands and brought it up to his lips as if to kiss it. He glanced at Jerry. “I’m not superstitious, but still, I mean, there’s nothing wrong with having a lucky charm. You know?”

“Yeah.” Jerry nodded as he watched the twisting flag. “I know.”

S.S. Hampton, Sr. is a full-blood Choctaw of the Choctaw Nation of Oklahoma with 13 wonderful grandchildren. He is also a published photographer and photojournalist. Stan retired on in 2013 from the Army National Guard with the rank of Sergeant First Class; he previously served in the active duty Army (1974-1985), the Army Individual Ready Reserve (1985-1995) (mobilized for the Persian Gulf War), and enlisted in the Nevada Army National Guard in October 2004, after which he was mobilized for Federal active duty for almost three years. Hampton is a veteran of Operations Noble Eagle (2004-2006) and Iraqi Freedom (2006-2007) with deployment to northern Kuwait and several convoy security missions into Iraq.

In May 2014 he graduated from the College of Southern Nevada with an Associate of Applied Science Degree in Photography – Commercial Photography Emphasis. A future goal is to study for a degree in archaeology—hopefully to someday work in and photograph underwater archaeology (and also learning to paint).