Stir Up a Something Scrumptious

Summer is gone and fall is in full swing, but there's no need to worry about that chill in the air. Susan Lodge has the best advice to snuggle in comfort. Susan recommends you dish up some romance with a Tasty Regency and a Contemporary Cocktail.


Recipe for Only a Hero Will Do

1. Blend one firm ship’s Physician (not over ripe) and one impulsive female gambler. Toss them together in a large wooden naval ship.

2. Pour into the middle of an enemy sea and leave to simmer.

3. Season with a pinch of sea salt and a good shake of humor.

4. Beat in a battle and then carefully fold in a cup full of heroic deeds and a heap of family betrayal. Moisten with a few tears.

5. Heat gently until it smoulders.

6. Enjoy whilst lounging in a comfortable chair.

Here is a taster. 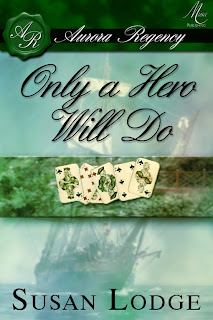 Hetty’s desperate gamble to avoid an odious match lands her all at sea. Can an overbearing ship’s physician really be the hero she needs to escape her treacherous family?

Marriage to a cruel dandy is not how Hetty Avebury envisions spending the rest of her life. Determined to raise funds to escape the match she earns money the only way she knows how—gambling. Her plans go astray and she finds herself onboard a man-of-war under the care of its stern physician. But Hetty soon realizes that the disapproving Doctor Withington is not at all the man she had first imagined.

If it wasn’t bad enough declaring one of the pressed men as a woman, Robert has been tasked with the tiresome job of returning her safely back to her dysfunctional family. It was ten years ago when his father gambled away his inheritance, home, and any chance of marrying the woman he loved. So when Robert discovers Hetty gambling he takes drastic action to cure her of the habit.

And if that’s not to your taste and you prefer a romance set in the twenty first century then maybe you would like to consider.

Recipe for The Man in the Buff Breeches

1.Take a thirty something career girl and mix with an invitation to a Regency themed ball. This will take some effort as they do not combine easily.

2. Pour in to a long glass with an assortment of men dressed up in breeches.

3. To prevent the mixture overheating add some ice cold cubes of terror and stir with a Regency fan.

4. Relax in your bunny slippers and enjoy.

Here is a taster 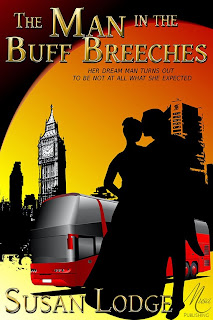 What is it about men in breeches? Shona finds out her dream man turns out to be not at all what she expected.

When a man in tight buff breeches examines her with his quizzing glass and calls her Miss Bennet, Shona fears the Regency themed ball is going to be as awful as she predicted. But then she is introduced to the gorgeous Nick who ticks every box for her perfect man.

As Shona looks forward to her first date with Nick, her happiness is marred by some disturbing observations around her flat. She doesn’t usually leave her blind rolled down that far, and she never keeps her bunny slippers tidily by the bed. And what is the man in the buff breeches doing lurking on the street outside?

As both men pursue her, Shona finds one makes her body quiver with desire, the other itch with annoyance. Then the men finally confront each other, and her life turns into a nightmare. Can her judgment regarding the male species really be so seriously flawed?

Susan Lodge’s first publication was a story for a UK national woman’s magazine. Heady with this breakthrough, she went on to write her first novel Only a Hero Will Do. She loves writing contemporary and historical romance, usually with a large dose of humour. After working in several cities including London and Bristol, she moved down to the Hampshire coast to raise her family.

Email ThisBlogThis!Share to TwitterShare to FacebookShare to Pinterest
Labels: contemporary romance, Only a Hero Will Do, romantic suspense, Susan Lodge, The Man in the Blue Flowered Shorts, The Man in the Buff Breeches