I am elated to introduce you to romantic suspense author Sarah Grimm and her latest release Midnight Heat. This book is a perfect holiday gift for your eReader friends and family. 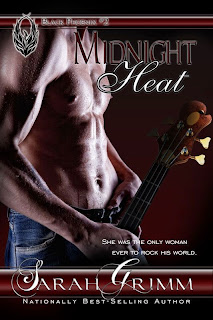 She was the only woman ever to rock his world.
But this time he'll have to prove he's offering more than just Midnight Heat.


The unconscious man wheeled into Dr. Rebecca Dahlman’s ER is sexy—devilishly sexy—and injured. This isn’t just any patient in need of medical help. He is the only man she’s ever loved—the one who still haunts her dreams.

Black Phoenix bassist Dominic Price made a mistake three years ago when he walked out on Rebecca. A mistake he plans to rectify. But first he has to convince her to open her heart to him again.

One touch of his calloused hands reignites their passion. Can they rekindle their trust as easily, or will her fears cause her to lose him again…this time to a man bent on revenge?

EXCERPT
Dominic’s level of pain could be gauged by the way he held himself, and his careful indrawn breaths. The doctor in her wanted to reach out and comfort. The woman in her wanted to reach out for a completely different reason. She’d never had such an irresistible urge to touch anyone the way she wanted to touch him. It had been there right from the beginning, their first meeting, and was still just as strong now.

She fisted her hands to keep from acting on the impulse.

Definitely not. Even injured and surly, he still emanated so damn much testosterone he made her teeth sweat. Her heart did a little flutter whether she wanted it to or not. “That’s not a good idea.”

“Have dinner with me.” There was the arrogance that had been missing a few moments before. His tone wasn’t commanding, but left no doubt in her mind that for him there was only one answer.

Too bad she couldn’t give it. “I already ate.”

His brow furrowed. “Why the bleedin’ hell not? Are you involved with someone?”

At her admission, he stepped closer, invading her space. Heat emanated off him, and although he did not touch her, she felt surrounded by him. “Take a drive with me?”

The low, soft timbre of his voice thrilled her, washed over her skin like a caress, and she fought a tremor. The heat of his body warmed her through her clothes. Wanting to step closer, to press against him and inhale his all too familiar scent, Rebecca stepped away. Physically distancing herself from him. She only wished emotional distance was as easily achieved. “Drive where?”

Not really, since there was no way on earth she was getting in a car with him tonight. Not when just the sight of him had her hormones standing at attention, one whiff of him, her body thrumming. Not after spending the entire day thinking about him.

Did he still hurt over the loss of what could have been? Did he still dream of her, of them? Had he ever?

Dominic blew out a breath and shook his head, his frustration clear. “It’s just a damn drive, Becca.”

It was so much more. Acceptance would be the first crack in the barrier she’d built around her heart after he’d walked out. With only the smallest encouragement, he would stop by on a regular basis, invite her to spend time with him. Which would, even if she kept her wits about her and turned him down, lead to more heartache. Just seeing him again made her yearn. Spending time with him was not an option.

She didn’t know why he was back in California. The why didn’t matter. What mattered was that he would be gone again soon. Dominic Price wasn’t the type to hang around. And she wasn’t stupid enough to believe she could change him. 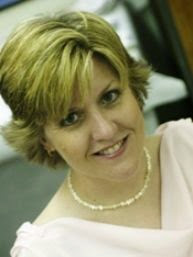 Sarah Grimm is a wife and mother of two—five if you count her much-loved dogs. She resides in beautiful West Michigan, with her husband, two sons and three rescue dogs. Her addictions include reading, laughter, and drag racing.

Be sure to check out Sarah’s Street Team and the
Black Phoenix Series Reader Group.


I'll be back Wednesday to with a new appetizer recipe. Until then...