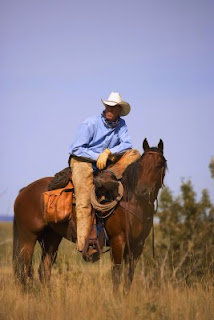 Awhile back I was on Colorado’s 287 driving south to a meeting—doing my usual in-car sing-along to…oh, I want to say "Panic! at the Disco." Suddenly, with the mountains of the Front Range in view, my muse plopped her mouthy self into the front passenger seat and said, “Hey, you need write a cowboy romance.”

Naturally, I scoffed. I’m a Carolina girl (lapsed, but still). We didn’t have ranchers back east. We just had farmers. What do I know about cowboys (beyond the fact they tend to wear their jeans quite well)?

Muse said, “You’re thinking too literally. You can tell a cowboy story without it being a treatise on ranch management.”

And I said, “Oh yeah? You want to tell me what, precisely, this story should be about? ’Cause I’m plenty busy already.”

Muse said, “Picture it. A single dad workaholic living in the middle of the Wyoming boonies.”

Muse said: “Yeah? Remember that road trip through southeastern Wyoming and that never-ending dirt road that tested the mettle of your marriage?”

I said, “Oh. That. That was…educational.”

Muse said: “Now imagine a community so sparsely populated because of the size of the ranches that most of the kids are home-schooled.”

Muse said: “And because few people are really qualified to home-school those kids, a couple of those ranchers have to hire a tutor from a service.”

Muse: “The biggest. Grey’s Anatomy didn’t have a cast this big.”

Me: “So I can write in some insane secondaries. Can I make it snarky?”

Muse: “The snarkiest, babe. I’ve got an idea for a sidekick named Phil. He can be this book’s resident misanthrope. Oh! And a bossy mother. You can have one of those, too.”

Muse: “No. NOW. You don’t want to ignore me. Remember what happened last time?”

Muse: “Oh. Since it’s going to be a doorstopper of a book, anyway, why not just go on ahead and add in a secret baby?”

And, that’s how the story of Ronnie and John came to be. It’s called Teaching the Cowboy and is available for e-readers. Here, check it out. 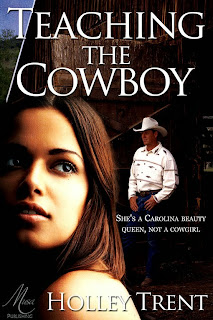 She's a Carolina beauty queen, not a cowgirl, but one Wyoming rancher thinks she's perfectly qualified for the job that matters most.

A year in godforsaken Storafalt, Wyoming? No big deal…or so traveling tutor Veronica Silver tells herself. She needs hands-on experience with a special group of students to qualify for a grant, and her assigned passel of ranch kids are special cases, all right. Ronnie loves a challenge, but pitted against a small town’s far-too-active grapevine and a woeful lack of amenities, she worries she won’t be able to hack it.

With the education system in Storafalt sorely lacking, rancher John Lundstrom thought hiring a private tutor would ease some of his considerable stress. What he didn’t expect was a powerful mutual attraction with Ronnie or her steadfast refusal to let him properly court her. She’s on a one-year assignment and wants no entanglements when it’s time to go home to North Carolina.

An unplanned pregnancy and Ronnie’s ensuing deception spins the Lundstrom ranch into a major upheaval. John refuses to let Ronnie run away with his daughter, but he may be forced to compromise when her homesickness threatens to drive a wedge between the two lonely hearts once and for all.

To read an excerpt from this book or any others by Holley Trent, please click a vendor's name. Musa Publishing - Amazon

Learn more about Holley and her upcoming works on her website and blog. Stay in touch with Twitter.
Posted by Sloane Taylor at 12:30 AM