Rhea Rhodan at Her Best

I'm happy to introduce you to a gifted author I enjoy reading. Rhea Rhodan writes award-winning sensual romance with a twist of magic, and a touch of paranormal. Here's a little from her latest novel. This book is a definite keeper. 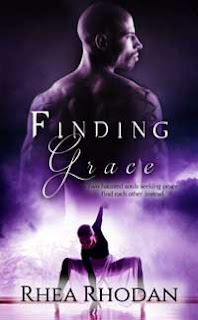 Two haunted souls seeking peace find each other instead.

Kidnapped by human monsters, Grace Thorne was ripped from her quiet intellectual life and left deeply scarred. She’s hidden herself for five years, but there’s no escape from the nightmares of the past, or visions of the future. When one foretells tragedy, she gambles her fragile defenses on a haunted man to prevent it—only to discover love is the biggest risk of all.

Jack Daggery doesn’t need a mirror to know why people avoid him, not that he cares. After years working deep undercover, immersed in betrayal and death, all he wants is some peace and the quiet security company he co-owns.

Dagger has no idea why the foul-mouthed little server of questionable gender bothers him. But he does know that living with the ghosts of his past was hard enough without being tormented by the mysterious thorn in his side—or finding how much he needs her.

EXCERPT
“Someone’s going to die.”
Dagger was already late. He didn’t have time for this shit. Especially not this pint-sized, purple-haired shit. The voice was surprisingly rough coming from the small frame, and the way the kid moved didn’t quite…well, there were a lot of those in the catering business. Thank God he’d finished getting dressed.

He’d thought the employee coat room would be a safe place to make a quick change, what with the party being well underway and all. Why would a server be in here now? They should all be busy.

Wait, that raw voice had been responsible for some damn creative cussing he’d heard a minute ago through the not-so-thin door. If he’d heard it, everyone else in the place must have, too. It had followed the loud crash that could have only meant the brutal end of a lot of glass. Someone had barked something after that, but the only word that made it through the door to Dagger’s ears was "fired."

Okay. So, not just short and queer in at least one way, but foul-mouthed and currently unemployed, too. Dagger shook his head.

"What do you mean, ‘someone’s going to die’? Is that supposed to be a threat?” Not that Dagger could blame the kid. He took a step closer anyway. "And why tell me?"

The little purple head cocked to the side. “You might be able to stop it. You're security, right?"

If Dagger had been expecting an answer, that wasn’t it.

“Actually, I'm a guest," he said through gritted teeth.

He and his partner had been invited to the charity ball by a prospective client. The CEO was only in town for the night. He’d refused to give Blackridge his business until he'd met both of them. So here was Dagger, squeezed into the biggest tux the rental place had buried in the back, making his best attempt to be presentable so they could land the account. The kid wasn’t buying it and he doubted anyone else would, either. He knew who he was, or who he’d been, anyway. The way he looked on the outside wasn’t the half of it.

The kid thrust up his chin about a foot and half below Dagger’s and glared at him through large, dark-tinted glasses. Brave little shit, anyway.

"Yeah, right. And I'm Paul-fucking-Bunyan. You fit in with these mothball penguins like Babe The Blue Ox in a goddamn china shop. I just don't want anyone to get hurt, okay? Look for a green van. I gotta go." He pulled a wool cap over his ears, shrugged on an over-sized ratty jacket and ducked past Dagger’s grab, fast. Damned fast.

Dagger hesitated a moment before following. Yes, he was late. But no, he really didn’t want to be here. And what if the tip was solid and he ignored it? There was that, after all.

When he stepped out the back door, he could see the kid stomping sneakered feet under the streetlight at the bus stop in the falling snow. That thin jacket didn't look like it was going to make it through the winter and now the kid was out of a job. The pang of empathy he felt caught him off guard. It had been a long time, but he still remembered what it felt like to be cold and broke, if not queer and undersized.

A green van rounded the corner just as he was about to step back inside and face the party. When he looked back at the streetlight, the kid was disappearing into a bus.

“Damn,” he muttered under his breath and stepped into the shadows, watching while it pulled into the parking lot and cruised slowly through.

His eyes roamed the rows of late-model, high-priced German cars and a few even pricier imports, then back to the green panel van. That didn’t mean the piece-of-shit on wheels didn’t stick out here as bad as he did, tux or no.

The van moved back onto the street and Dagger turned to go back to the party again, fighting his disappointment at the loss of a reprieve. Then he stopped. It wouldn’t hurt to wait five more minutes, just to make sure the van didn’t come back. He really kind of had to, didn’t he? Just in case the kid wasn’t some whack job trying to get someone in trouble or something. He moved inside the door, leaving it open a crack, and checked his watch...

Rhea Rhodan lives in Minnetonka, Minnesota and has been telling herself stories since long before she could write. She attended the University of Minnesota with a focus on Journalism, then Brown Institute for Broadcast Journalism. After many adventures, misadventures, and a couple of short marriages, she found the love of her life in Regensburg, Germany, and has been living happily ever after since.

She journaled her adventures, but didn't combine her writing and story-telling until several years ago. At that time one of the stories grabbed her by the throat and shook her like a rag doll until she gave in and wrote it. Having tasted freedom, her muse refuses to return to the confines of her head, and has successfully turned the tables, keeping her at the keyboard to appease it.

Her stories always had a twist of magic or a touch of the paranormal. Why the romance? Because she believes in happy endings, and helping people imagine them.

Learn more about Rhea Rhodan on her website. Stay connected with Rhea on Facebook, and her Goodreads Author Page. You can also read more about Finding Grace on Goodreads Books.
Posted by Sloane Taylor at 12:30 AM