I'm happy to introduce you to Tom Olbert, a gifted science fiction/horror author with a devilish sense of humor. Tom and eleven other wonderful authors came together and created an anthology well worth reading. Visions II: Moons of Saturn is available in paperback and e-book. 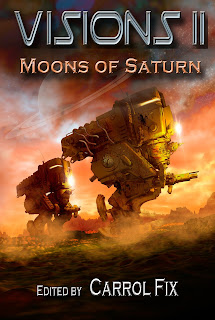 Ice mining in space, colonization of extraterrestrial moons, war between interplanetary corporations, and time travelers bent on destruction, with mighty Saturn as the backdrop.

The theme, Moons of Saturn, provided inspiration for the creation of widely divergent tales centered about the mysterious planet and its system.

NASA’s Cassini Missions have captured stunning images of Saturn, its mesmerizing Rings of ice and rock, and its 53 officially named moons. These twelve authors present their visions of the Saturn System’s promise, as rich and diverse as the reality of Saturn, its Rings, and moons.

• In the depths of an ice mine on Dione, embattled troopers combat alien amoeba in the frigid tunnels.

• Wry humor combines with eccentricity in a tale of time traveling disaster.

• Enemies team up to complete a mission, in an intense tale of revenge.

The Visions Series tells of our urge to venture outward and to explore the Universe. Visions: Leaving Earth, describes our first faltering steps to rise from Earth’s surface. Visions II: Moons of Saturn confirms that we have left the Earth and are at home in our solar system. Visions III: Inside the Kuiper Belt proclaims humankind’s domination, from the Sun to the outermost reaches of the Kuiper Belt.

Beyond these volumes, we will explore outside our solar system: Deep Space and the Near Stars, Colonizing the Milky Way, and Understanding the Universe. Our vision is limitless. 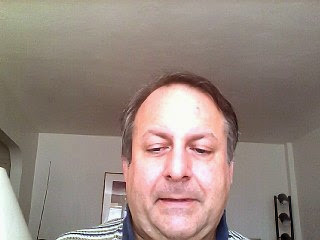 Tom Olbert lives in Cambridge, MA, home of Harvard, M.I.T., liberals and wackos. When not writing science fiction and horror or working, Tom volunteers for candidates and causes he cares about, like the environment and civil rights. Tom’s father Stan Olbert was a fighter in the Polish resistance during WWII and later a professor of physics at M.I.T. Tom’s mother, Norma Olbert has self-published Stan Olbert’s life story: “The Boy from Lwow”, now available in paperback. Tom’s sister Elizabeth Olbert is an accomplished artist and now a teacher of art at the University of Maine.

Olbert's fiction has appeared in a number of anthologies, including “In the Bloodstream” by Eden Royce, “Torched” from Nocturnal Press and “Something Wicked Vol. II” from EKhaya.

Learn more about Tom Olbert on his blog Other Dimensions.
Posted by Sloane Taylor at 12:30 AM