Gifted author Rhea Rhodan writes award-winning novels and has a new one that is romantic suspense with a fantasy twist. This book is one you definitely want to read. 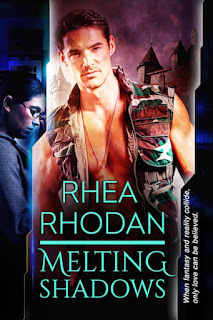 When fantasy and reality collide, only love can be believed.

Shattered by a brutal attack and forced to flee, painfully withdrawn Dr. Prudence Marsh buries her emotions under numbing logic. For years, her escapes to a fantasy world created to survive her hellish past have been nothing more than a guilty pleasure. But when the host of the safe house turns out to be a dead ringer for her dream warrior, she fears she’s lost her precious mind along with everything else.

Ex-SEAL Max Delaney has been known to dabble in a hot, delicious mess—or two, or three. He has no idea how to handle a cold, sour one. Blackmailed into babysitting Dr. Marsh in his hidden bunker while she finishes a top-secret project sucks. Until he falls for her. Then it blows. Every clue Max unravels buys him more questions. Every step forward lands him two steps back, flat on his ass.

Demons past, present, and future haunt Max and Prudence as they stumble along the twisting path to love. Merciless enemies and shifting alliances drive both to desperate measures, tumbling them over the border between shadow and substance—where each must choose what, and whom, to believe.

EXCERPT
Preoccupied with the effort of facing the day and shoring up her defenses, she didn’t see him until it was too late.

He stood at the sink in the kitchenette, wearing only a pair of denims. Thick, tousled, black locks curled at his neck. The overhead light glistened on his damp skin, defining the well-developed muscles of his shoulders and back. She gulped as her gaze fell lower, taking in the way the tight, worn jeans that hugged his equally muscular posterior and thighs. Delane. She squeaked, and he turned toward her.

One good look at his bare torso sent her screaming back into the bedroom as fast as her long, clumsy legs would carry her. She slammed the door and leaned on it, fighting to remain standing. Brutus jumped off the bed, barking fiercely.

“Hey, are you okay? What’s wrong? Dr. Marsh?” She could barely hear him over the din.

Her heart thudded and skittered. Oh, gods of OtherWhere, he really was Delane, every stunning inch of him—including the wide, jagged scar low on his abdomen.

Prudence counted out a deep inhalation, then an equally long exhalation.

Better. She couldn’t possibly be in OtherWhere; it didn’t exist. Any resemblance had to be purely coincidental or imaginary. She didn’t have her glasses on. The stress of the last three days had affected her mental stability. Yes, that must be it.

Blessed, cool logic seeped in, enabling her to collect enough composure to raise her voice to a volume sufficient to penetrate the door. “I am fine. I was simply unprepared to encounter a half-naked man on my way to the washroom. While I am perfectly willing to make some concessions in light of the imposition of my presence, such displays are wholly unacceptable. Kindly finish attiring yourself and notify me when you have done so. I shall thank you to confine your nudity to your private quarters for the duration of my stay.”

A rolling chuckle leaked through to her ears, and she understood he not only found her ugly, but laughable as well. The thought burned her carefully built wall to ashes in seconds. Tears came; the wherewithal to stop them had already been spent. Managing to strangle a sob offered a small satisfaction.

She slid down and rested her back against the door with her knees pulled up to her chin. Brutus licked her face and whined. She hushed him with a hug. He curled up with her there on the floor, an anchor in her storm of grief.

The inner weight lightened as the tears ran their course, lending a degree of relief—until she caught a glimpse of her red, puffy eyes in the mirror over the chest of drawers. She was as helpless in the wave of terror gripping her body as she’d been to prevent the tears. That the fear was irrational, a vestige of her childhood; that there would be no punishment, didn’t make it any less real or more manageable.

No matter. A display of vulnerability was as dangerous now as it had ever been. Among her earliest lessons had been those that taught her not to supply ammunition to be used against her later.

Thankfully, cool water would aid in effacing the evidence, as would her glasses, provided she could reach the washroom undisturbed. Rather than honor her request, Mr. Delaney may have chosen to further amuse himself at her expense.

The prospect of additional humiliation galled to a greater degree than it ought to. After all, Esmeralda’s desire for Prince Delane’s regard belonged in OtherWhere, with the prince who desired her in return, not here with Dr. Prudence Marsh for a man who considered her a freak.

Rhea Rhodan lives in Minnetonka, Minnesota and has been telling herself stories since long before she could write. She attended the University of Minnesota with a focus on Journalism, then Brown Institute for Broadcast Journalism. After many adventures, misadventures, and a couple of short marriages, she found the love of her life in Regensburg, Germany, and has been living happily ever after since.

She journaled her adventures, but didn't combine her writing and story-telling until several years ago. At that time one of the stories grabbed her by the throat and shook her like a rag doll until she gave in and wrote it. Having tasted freedom, her muse refuses to return to the confines of her head, and has successfully turned the tables, keeping her at the keyboard to appease it.

Her stories always had a twist of magic or a touch of the paranormal. Why the romance? Because she believes in happy endings, and helping people imagine them.

Learn more about Rhea Rhodan on her website. Stay connected with Rhea on Facebook, and her Goodreads Author Page.
Posted by Sloane Taylor at 12:30 AM