How long does it take for the rain to cleanse the sand of blood?

How long does it take for the wind to cleanse the air of the screams of the wounded and dying?

How long does it take before the sunlight heals a war-torn land? 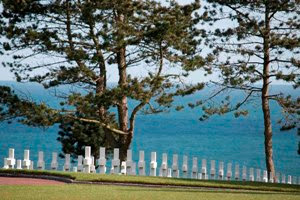 Recently I was privileged to visit the Normandy American Cemetery, Omaha Beach, and Utah Beach, in Normandy, France. I am a student at the University of Nevada-Las Vegas (UNLV), but this past spring semester I studied at a university in Pau, France, courtesy of the Universities Study Abroad Consortium (USAC), University of Nevada-Reno (UNR). At the end of the semester many of us were on an optional tour of the Normandy region. 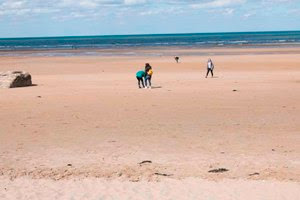 At a peaceful, sunlit Omaha Beach I picked up a handful of damp sand where, 73 years ago this June 6, tens of thousands of young men charged out of landing craft into minefields, artillery, mortar, and machine gun fire. Though many fell on the ramps of the landing craft, disappeared from sight in the cold waters, or collapsed on the beach, others continued to move forward, encouraged by each other, encouraged by their NCOs, and officers. So much courage, so much dedication among those that our country sent into an apocalyptic fight against tyranny and evil, in order to free other nations. 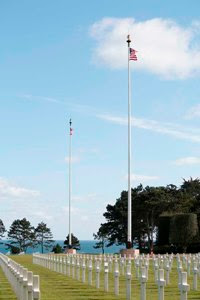 At the American Cemetery, dressed in a suit and tie and cowboy boots, I paid my respects to those who came before me. And I remembered the names of comrades killed in the Iraq War, as well as the names of those I never met but who my fellow Soldiers knew, and those who have died since our return home, including by suicide. I chose a spot where I could see the American flags and, facing in the direction of Omaha Beach, I stood at attention and saluted. I was alone because I did not tell anyone of my intent. In a sense, this solitary action was rather symbolic because the civilian world is often unaware of what happens in the military world.

I had read about D-Day and the Normandy Campaign since I was a young boy. Service in the Army brought a feeling of belonging to something greater than I, along with the sense of obligation that comes with choosing the Profession of Arms.

Now, words on paper have become a personal memory of white crosses in rows in a grassy landscape, the nearby trees rustling in the wind, the sound of ocean waters on a tranquil beach, and my face caressed by a sea breeze. I remember the cold, gritty feel of the sand trickling between my fingers, wind surfers in the distance, and fellow USAC students, all much younger than I, walking along the beach. Due to some personal or familial connection, they did not hesitate to hurry from the Cemetery parking lot down to the cliffs, and then down the slopes to Omaha Beach, even though they only had 30 minutes to make such a lengthy round-trip journey.

I remember one young girl told me, as we walked toward the slopes above Omaha Beach, that she had gathered sand from the beach to take home to lay on her grandfather’s grave. I later saw a photograph of the vial of sand on his gravestone – her grandfather was a Veteran. This girl, this young woman, accomplished her goal for her grandfather.

Rest in peace my brothers and sisters in arms who made the ultimate sacrifice. Know that for each one of you who fell, another stepped forward to take your place. Like you, these new generations who choose the Profession of Arms may be required to make the ultimate sacrifice. Like you, they will do so if needed. And like you, these new generations stand between us and the evil loose in this world. 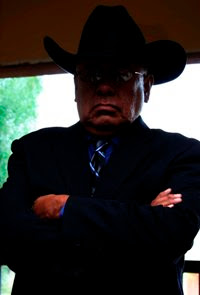 SS Hampton, Sr. is a full-blood Choctaw of the Choctaw Nation of Oklahoma and grandfather to 13 wonderful grandchildren. He is a published author, photographer and photojournalist. Hampton retired from the Nevada Army National Guard with the rank of Sergeant First Class; he previously served in the active duty Army, the Army Individual Ready Reserve and was mobilized for the Persian Gulf War. He enlisted in the Nevada Army National Guard after which he was mobilized for Federal active duty for almost three years. He is a veteran of Operations Noble Eagle and Iraqi Freedom with deployment to northern Kuwait and several convoy security missions into Iraq.

Hampton has had two solo photographic exhibitions and curated a multi-media exhibit. His writings have appeared as stand-alone stories and in anthologies from Dark Opus Press, Edge Science Fiction & Fantasy, Melange Books, Musa Publishing, MuseItUp Publishing, Ravenous Romance, and in Horror Bound Magazine, The Harrow, and River Walk Journal, among others.

He graduated from the College of Southern Nevada with an Associate of Applied Science Degree in Photography – Commercial Photography Emphasis. He has been studying at the University of Nevada-Las Vegas with in a double major in Art and English. However, he recently returned from spending a cold, rainy Spring 2017 semester studying at a university in southwestern France in the shadow of the Pyrenees Mountains.