Selena Illyria is back to share insight on another of her exciting books CHOCOLATE SNAKE BITE. Here's what Se has to say:

And now for your pleasure is my latest offering to the Del Fantasma line from Aspen Mountain Press. 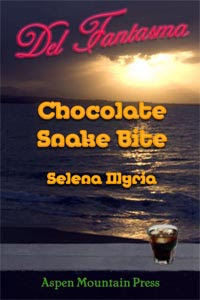 BLURB:
Every relationship has problems and for months now all Dale and Val have been doing is fighting. He wants it to stop. So drastic times call for drastic measures. Dale takes the Love’s Bane potion hoping that Val will be too busy lusting after him to fight with him, but sex can’t solve every problem.

Val doesn’t want part of her lover. She wants all of him, even the dark aspects of his sexual desire. She yearns for his brand but every time she brings up the subject he shuts her down. How can they communicate when he won’t open up?

Will the arrival of his brothers and a trip to the Demonic Snake court help their relationship or hurt it?

Dale looked into Cody's hard sea blue gaze and nearly reconsidered his actions. His thoughts turned to Val and the last few weeks. He shook his head, path resolved. "I have to do it. There is no other way."

"This kind of magick isn't something you just pickup. It's not something you mess around with. Do you even know what's in this so-called aphrodisiac?"

Dale winced. "No. Look, it comes from a reliable person. I trust my source."

"What does Pietro say about this? After all, that kind of potion is restricted to demons." Cody picked up a glass and started cleaning up. His eyes focused on Dale, making him squirm.

"He doesn't know..." Dale's voice trailed off as guilt surfaced for the umpteenth time. Ever since the thought had entered his mind about gaining a small sample of the Love's Bane, He'd felt guilty. Pietro. King of the Demons, was one of his best friends. If he found out what Dale was up to, Pietro would have his balls.

"Let me remind you why it's banned. Love's Bane is an aphrodisiac that is highly addictive. Taken in high quantities it could poison you. If there hadn't been a pact between demons and warlocks the magickal beings would still be trying to destroy your asses with it. So, I don't care how bad your relationship problems are. Don't. Do. It."

Dale looked away from Cody. "Look, I'm at my wit's end. I don't know what to do about Val. She and I have been fighting, a lot. I mean we're a passionate couple, but it's just too much lately. I'm starting to worry that she'll want to break it off with me."

He loathed feeling so vulnerable. "I'm Dale Thornston, heir to the Serpentine Throne, the fourth most powerful house in all of Demon world and I'm here, sulking in a bar, drowning my troubles in some drink called Chocolate Snake Bites and talking to you about things I would never tell another soul, not even my best friends or brothers. It's pathetic. I should be home fucking the daylights out of my mate, not here. If she hadn't had to work late, again..." He stopped talking and dragged a hand over his face. "I'm tired of being alone at home."
"The why don't you ask her about her feeling instead of doing something stupid?" Cody asked.

"Such a simple question. Don't you think I've tried that? We either get interrupted or in a fight and I always end up sticking my foot in my mouth. It just feels like we're never going to stop fighting. It doesn't help there's a new guy in her office and it's very clear that bastard wants what's mine." His stomach roiled. Anger boiled in his veins as an image of Val's new co-worker and boss, a werewolf, rose in his mind. The bastard had made it clear he wanted Val and would play dirty to get her.

I guarantee CHOCOLATE SNAKE BITE is a thigh-clenching book you'll want to read several times. We'll be back tomorrow with more from Selena Illyria. Until then...

Sloane Taylor
Sweet as Honey...Hotter than Hell
www.sloanetaylor.com
Posted by Sloane Taylor at 8:58 AM