FRONT AND CENTER WITH P.A. BROWN

L.A. BYTES is the thrilling third novel in P.A. Brown’s L.A. series. This expertly written book and has an intricately woven plot that will keep you guessing until the last page.

Here's what Romance Junkies has to say:

L.A. BYTES is a gripping and captivating mystery that kept me on the edge of my seat. 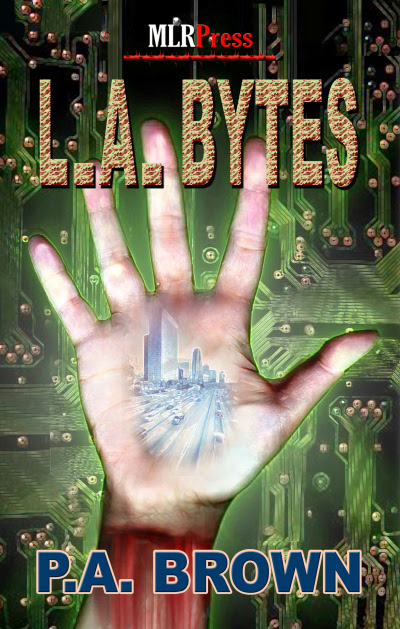 EXCERPT:
David extended his card to the tiny woman with pumpkin-colored hair.

She took the card and held it between her finger and thumb like it might be the devil’s calling card. She barely glanced at it.

Alice had been the victim’s neighbor for “nigh on five years, young man,” she told the two detectives. “That’s why I told that young pup that there was no way Nancy committed suicide. She’d have paraded naked down Glendale Boulevard sooner than she’d have killed herself.”

“We’re here to listen, Mrs. Crandall.” David tipped his head and kept his face neutral. He flipped open his notepad and wrote the day’s date. “We’d like to ask you a few questions about your neighbor, if we could. Nancy Scott was her name, is that correct?”

“You knew her five years. Did she move in five years ago, or did you?”

“I’ve been on this same spot of earth since before my good husband Lloyd passed, nigh on eleven years ago it was, rest his soul. He was a good man. Salt of the earth.”

David scanned the room. From what he could see it looked like Alice had furnished the place during the height of the beige eighties and never recovered from it. If there was a spot of color anywhere, he couldn’t find it. “So Mrs. Scott moved in five years ago. Was she by herself?”

“That man was a saint, he was. Why, even Father Barnaby used to remark as how good he was, never drank a tipple in his life and worked until they forced him to retire at sixty-five. Not that he wanted to leave, mind you, the man loved to work, almost as much as he loved to talk—”

“Yes, Mrs. Crandall,” David said. “I’m sorry for your loss, but if you could just answer some questions about your neighbor.”

“Lloyd would have loved Nancy. She was a pious woman, never heard a curse word come out of her mouth. Even Lloyd wasn’t that good.”

“When was the last time you actually saw Mrs. Scott, ma’am?” David persisted. Patience was a virtue, his own, less than saintly, mother might have said, but there were times when patience could take a flying leap. “You mentioned her missing Mass on Sunday. So if she wasn’t there, when did you see her last?”

“Sunday Nancy always came with me,” Alice said. “She wasn’t born a Catholic; she told me that right after I first asked her to join me at Incarnation. Was born a Presbyterian but never found satisfaction in that faith.” Alice dug her short, unpolished nails through the tight mass of bright hair. “She strayed, she said, and when she found her way back, she decided the good Lord meant her to be part of the true faith, so she come and joined our church. She asked for my help then,” Alice said proudly. “She asked me to help her find her way back to God.”

“Yes, ma’am,” David said. Beside him Martinez harrumphed softly. “But I still need to know when you last saw Nancy alive.”

“I’ll tell you if you stop jabbering. Can’t stand a man who always interrupts. Her son was like that, you know. Always cutting in, interrupting his mother like everything he had to say was pure gospel and the rest of us should just shut up and listen.”

“Her son, ma’am?” David leaned closer, pen poised over his dog-eared notepad. “Mrs. Scott had a son? What about a Mr. Scott?”

“No Mr. Scott. He was her past, she used to say, she was her own future. She never spoke of him. If he was anything like her son, I can understand why.”

“Would you know where we might find this son?”

“He comes around, regular as church bells,” Alice said. “Every other Wednesday.”

“And the last Wednesday he was here?”

The woman shrugged her thin shoulders. “Week or so ago.” The corners of her mouth lifted in a smile. “Why, I guess that would be two weeks ago tomorrow.”

David and Martinez traded looks. “Yes, ma’am,” they both said.

“I guess you can ask him these questions.” Alice smiled slyly. “Oh, and the last time I saw Nancy was Saturday morning. We walked down to the market to buy groceries.”

“What did Mrs. Scott buy?” David asked, remembering the nearly empty refrigerator. And the chocolate wrapper.

Alice sniffed. “Orange juice, couple of cans of soup, bananas and a newspaper. I never saw such a one for not eating proper. I don’t know how she stayed healthy.” Her face suddenly screwed up. “I guess she didn’t though, did she?”

“You still think she killed herself?”

“That’s up to the medical examiner to determine,” David said.

“Will you be by to talk to that boy of hers tomorrow?”

David almost smiled in return. “You have a good day now.”

“You find out what happened to Nancy, and I’ll have a good day.”

She shut the door of her apartment behind them, leaving them standing in the musty hallway looking at each other in bemusement.

“Guess we come by to talk to junior, then,” Martinez said. “Where do you think he was all this time?”

David pulled out the car keys and jangled them against his leg. “We’ll have to make sure to ask, now won’t we?”

To learn more about P. A. Brown and her terrific books, check out her website. You'll enjoy the journey.

I'll be back Wednesday with multi-published Linda Sole, who now has 100 books to her credit. Be sure to drop in. Until then...

Sloane Taylor
Sweet as Honey...Hotter than Hell
www.sloanetaylor.com
Posted by Sloane Taylor at 9:01 AM