Born in Canada, P. A. Brown's approach to life was tempered in the forges of Los Angeles. After eight years in the City of Angels, she was endowed with a fascination for the darker side of life and the professionals who patrol those mean streets.

P.A. considers those years a lifetime's worth of experience that she mines regularly in her novels. She is not afraid to explore the darker sides of her characters and the streets they inhabit, including the ones most people are afraid to walk down alone at night.

Here's an excellent example of her terrific books. 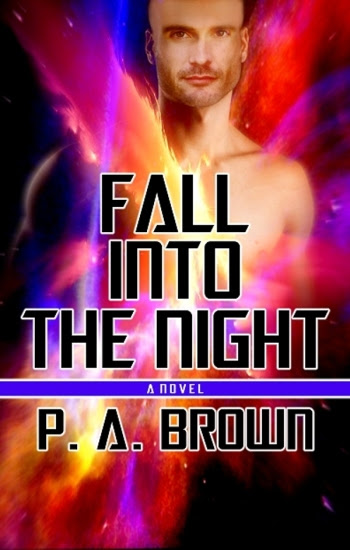 BLURB
The death of his father catapults Terik u Selhdun into the position of Ogema of Tiamat, the planet of his birth. It was a position he rejected years before when he and his autocratic father clashed over Selhdun's homosexuality. Instead, Selhdun became a linked pilot and owner of his own ship, the Necromancer. Linked pilots are the only ones who can take a ship through Jump, a form of hypserspace travel that allows the empire of man, known as the Autarch, to thrive.

War drove the humans off their home world of Terra (Earth). In the subsequent years, the coordinates of the Terran Jumpoint were lost. When they eventually resurface, Selhdun and the Necromancer are hired to transport a group of scientists back to Terra in order to ascertain whether humans can safely return to the planet of their origin.

But numerous forces in and out of government don't want Selhdun to succeed. Troubles plague the expedition, including an assassination attempt and brutal enemies hell-bent on stopping Selhdun and the ship, even as he and his crew make strides in their mission. Yet in Terran space, a new lethal menace awaits, and soon everyone on board the Necromancer discovers the battle to stay alive has only just begun...

EXCERPT
A hard, driving snow scudded out of a sky as bleak and depressing as the fallow fields around them. Selhdun didn’t need to consult Ship to know the weather was going to turn even nastier and soon. He had too many memories of such storms closing in on them.

“Get us inside,” he said to the driver when their vehicle paused at the first Enclave gate for HouseComp to verify his identity.

Selhdun knew at that moment a battery of unseen lasguns was trained on them. He barely felt the actual scan, which read the schematics of his embedded ID and verified his identity against HC’s database.

The lights of a distant village shone through the mounting storm. He tried to think of the village name; had he ever been there? He seemed to remember a harvest festival. The fireworks to honor the Ogema and his children had impressed a seven-year-old Selhdun for years afterward. Kanahchi-Wahnung, that was it. A tiny village full of brightly painted houses like so many other villages that made up the local farming co-ops.

A gust of wind rocked the groundcar. The icy-fingered wind whined as it sought to reach the warm bodies inside. Selhdun huddled within the folds of his coat and waited.

“Trust him to save his dying until the end of the season,” Selhdun said to Pakal. “I could do without weather. I think I deliberately forgot how miserable climate is. Don’t tell me—on Xua this would be a balmy spring day.”

“On Xua the elements are legendary.” Pakal made a pretense of peering out into the growing blizzard. A spray of ice crystals rattled against the car windows. “We rarely had such pleasant weather, in spring or any other season.”
Selhdun shivered and not just from the cold. His muscle already shook from over-exertion. He regretted the impetuousness that had brought him here.

Pakal was right. Selhdun should have turned up the gravity or spent time in the gym. If he had, his heart wouldn’t seem like it was trying to climb out of his chest. Even sitting, it felt like hot spikes were being driven into his calves.

The groundcar crossed the open inner courtyard. The main house loomed out of the gathering gloom, all rough-cut stone and windows shuttered like closed eyes, hiding secrets. His ancestral home looked no different than it had the night he had fled fifty-nine years earlier. He realized now the place never changed, only the people inside came and went. It had been built three-and-a-half centuries ago by the then current Ogema who reputedly had wanted a place away from the government seat in Outuais for his wives and sons.

Outside the open front doors a waiting throng gathered. Composed of at least a half a dozen castes, cloned and programmed to fill specific functions, Selhdun couldn’t remember what half of them did. Not that it mattered. They were there to serve him in any way he wanted.

“My mother wastes no opportunity to play the grand dame,” Selhdun said.

“Already I feel her knives at our back.” Pakal turned to stare out at the crowd. “I do not like the look of this.”

“Even my mother wouldn’t dare anything too obvious.” Selhdun glimpsed glittering spy-eyes within the craggy stone walls and the barest glint of a lasgun mounted under a window arch and wished they made him feel safer. The blue-flame funeral torches on the stone walls cast shadows on the few tendrils of snow that lay in every corner. It lent exposed human skin a ghoulish cast.

“Stupid ritual.” Selhdun glared at the funeral torches that were only lit when a male member of the ruling Ogema died. The last time he had seen them he had been four. His grandfather had died, making his father Ogema. He had thought them pretty then. Now he knew better. How many people here wished the flames burned for him? “Barbaric and pointless.”

Pakal shrugged. “They but seek to find comfort in custom. Hardly pointless.”
“Don’t fool yourself. No one here regrets his passing.”

The snow thickened, and the wind died in the walled-in courtyard. Fat snowflakes descended leisurely, and Selhdun watched them settle everywhere. Unbidden, an image came. The image of another time and another world. Another companion.

He shivered and tried to shake off the memories, but they persisted. God, he hadn’t thought of Rauli in years. His eyes closed against remembered pain. Beside him Pakal moved, and the cushioned seat crackled under him.

“Nothing,” he lied hoarsely. “Ghosts. That’s all.”

To learn more about P.A. Brown, check out her website. You'll be glad you did.

I'll be back Wednesday with Raine Delight, a creative author you're sure to enjoy. Unitl then...

Sloane Taylor
Sweet as Honey...Hotter than Hell
www.sloanetaylor.com
Posted by Sloane Taylor at 8:59 AM