Dynamic author Destiny Blaine is here to share her soon to be released novel Waking Up the Arguably Dead.

Here's the tagline: Waiting to Die Can be Such a Drag.

Now that has to peak your interest. :)

Hi, Sloane. Thank you for allowing me to be your guest today. I wanted to stop by and tell you about my upcoming book.

Waking Up the Arguably Dead is a Dark Paranormal MFM Romance with comic relief elements. Readers get a glimpse inside my hometown of Blountville, Tennessee as they flip the pages of this Passion in Print novel. They’ll see what I see while driving down Main Street and they'll discover a country store, while somewhat fabricated, where many of us pop in for an ice cold soda and good conversation.

Waking Up the Arguably Dead introduces readers to Granny Myrtle, a spunky little old woman who is several characters all wrapped up in one. I created Granny from a few country grandmothers I’ve had the pleasure of meeting at least once. As for Addison: Well, I don't know anyone quite like Addison but she sure is one lucky gal. Read the book and find out why a lot of girls in these parts might be a little envious.

In this novel, you’ll meet Melissa, the LPN over at the local physician’s office. I’m happy to say she is true to form. No, there isn’t a Dr. Michaels in Blountville, but Melissa lives here. She’s a saucy little vixen who knows what she wants and doesn’t care to tell everyone how much she’s enjoyed getting it. The first name has been changed to protect the promiscuous and as far as I know the real ‘Melissa’ never worked a day in her life. You'll like her though. She's full of surprises.

Step inside Waking Up the Arguably Dead. Meet my characters. Then, drop me an email, destinyblaine@yahoo.com, and let me know what you think or what would you do if you were in Addison’s shoes?

WAKING UP THE ARGUABLY DEAD
Destiny Blaine
Passion in Print 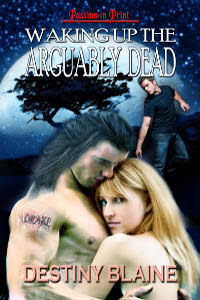 BLURB:
Martin Cartwright's neighbor receives disheartening news. She's dying. As far as Martin can tell, Addison has never looked better, but when daily sightings of his beautiful neighbor become few and far between, Martin realizes Addison isn't too keen on living. And he decides to help her get on with dying.

Martin plans to scare Addison into living. Unbeknown to him, someone is watching with similar goals. Only Drake Valentine's interests in the lovely Miss Deveraux vary from Martin's ambitions. Soon, Addison must choose between living in the shadows of sickness and stepping into the darkness where she's always been drawn.

EXCERPT:
Addison Deveraux stared at her family physician for several minutes, unable to speak and incapable of processing the information he relayed. She focused on the white walls around her. She skimmed over the medical licenses and board certifications, eventually narrowing her gaze on the overstuffed plastic brochure rack housing material about common medical problems. The entire time, she remained faintly aware of her doctor’s monotone voice. An avid movie enthusiast, Addison disconnected from the moment and recalled a recent flick she’d watched.

She remembered one scene in particular where a woman learned of her life-destroying health circumstance. Thanks to modern day technology, the character slipped into a mindboggling funnel surrounded by noise typically found in a seashell. The echo intensified and the room scrambled into spinning pieces of a jigsaw puzzle.

On the big screen, the actress sobbed. The doctor calmly provided information about the disease for which she’d been diagnosed and the woman finally zoomed in on those fated words: “You’re dying.”

Addison blinked. “I am?”

She swallowed. “No, I was…” Thinking about dying.

“Addison , this isn’t something you should take lightly,” Dr.Michaels stressed, leaning over his desk. An older man with salt and pepper hair, Dr. Michaels wore tinted large-rimmed glasses and resembled someone who might have been chosen to portray a physician delivering detrimental news.

Addison watched his mouth move. His words hummed all around her, beating into her ears like a hollow drum. “Treatment is something we should discuss together. This isn’t the end and that’s it.”

Advice slipped from his lips but the words ran together in a never-ending slur. “Think of diagnosis as a transition. By the time you’ve processed the information I’ve given you, you’ll be ready to face the days ahead. In the end, you’ll be much better off.”

She gulped. There it was. The dreaded statement, You’ll be much better off.

How many times had she attended a funeral for one of her grandmother’s friends and heard the same thing? Mary Lou Cornell went to a better place. Dan Bradley was much better off after both arms and one leg were amputated.

Carla Sue Davis found Jesus after living on the streets and working for some pimp who decided to repay her years of servitude with continual beatings. And Barbara Jo Jones faced death the same way she’d faced living; always waiting for the other shoe to drop.

No indeed, Addison refused to walk down the same road chosen by Granny Myrtle’s best friends, or her cousin Gertrude, who for some reason received her bad news and decided to kick the bucket, before the bucket smacked her upside her head. No way. Addison planned to do a little better for herself. She’d die on her own terms.

The way Addison met death was her decision. Since she had a choice in the matter, she planned to go on out there and greet death—take her fate by the horns and ride the daylights out of it.

Yep, it was time to get on with dying.

Learn more about Destiny and the books she loves to write on her website and be sure to check out Destiny's informative blog.

Sloane Taylor
Sweet as Honey...Hotter than Hell
www.sloanetaylor.com
Posted by Sloane Taylor at 8:35 AM