SPICE UP YOUR LIFE

with Ginger Simpson through her gifted writing in all of her thirteen books.

FIRST DEGREE INNOCENCE is Ginger's latest release and a writing stretch for this talented author. It's a novel that proves Ginger Simpson has a formidable talent.

On the personal side, Ginger tells us she retired from her big girl job and hoped to devote more time to writing, but got caught up in the every day world of promotions, emails and chatting. Ginger decided that one book a year might just be her norm.

Ginger spends time with husband, Kelly, and always finds time for Spencer, the love of her life. Her grandson, diagnosed with Autism, has shown her that with determination, all things are possible. Look how long it took Grandma Moses to find fame. 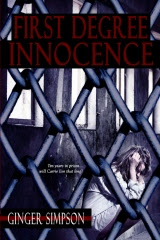 BLURB:
Imagine being sent to prison for a crime you didn't commit and having everyone laugh when you proclaim you're the victim of a terrible injustice.

The transition to an inmate's life is hard enough, but when the prison bully arranges to have Carrie transferred to her cell, leaving behind her current bunk-mate and the first person to believe in her innocence, Carrie finds herself embroiled in a plot in which she wants no part.

The only bright spot in her life is a secret attraction she shares with a male guard during her work as a trustee in the prison garden. But can he save her?

EXCERPT:
“This is all a big mistake. I shouldn’t be here.” Carrie’s voice trembled. “Honestly, I’m innocent.”

With deeply-furrowed skin and graying hair, the guard looked well past fifty. She walked closer, stopping when her face was only inches from Carrie’s. “Do you have any idea how often I hear that in here?” Her breath reeked of cigarette smoke, and Carrie wrinkled her nose and turned her head. How could someone she’d never met hate her so much already? Was there even an ounce of compassion buried beneath that deep sneer?

The older woman pressed the edge of her baton against Carrie’s jawbone and forced her face forward. Her stomach clenched. Evil gleaming in her eyes, the guard delved the wooden stick under Carrie’s bra strap, slowly guiding the silky string off her shoulder and down her arm. Gooseflesh peppered her skin and she shivered.

“Stripping means everything, inmate Lang. Panties, too, sweetheart. Move it! I’m a busy person, so quit wasting my time.” The matron strode to the other side of the room, leaned against the wall, and ogled Carrie while she finished undressing.

Lowering her head, she dropped her bra atop the pile on the floor then kicked her panties off next to it. Feeling the cold invade every pore, she wrapped her arms around her upper body. Threatening tears blurred her eyes, but she squeezed her lids together and tilted her head toward the ugly pipes snaking across the ceiling. Oh Lord, what did I do to deserve this? Please, help me. You’re my last hope.

“Praying are you?” the gravelly voice taunted. “It’s a little late for that. Put those hands down to your sides and look to the front, missy.”

Carrie opened her eyes and swallowed hard. Did the woman expect her to know what to do? “N-Now what?” she asked in a quivering voice.

Just a short time ago, she’d been frisked, photographed, and finger-printed for the second time in her life. Her initial arrest had been horrifying enough, but she at least made bail for a time. Now this? She gazed down at the black ink smudges still visible on her hands. Why was this happening? Never had she felt so humiliated…and disbelieving. How could the judge have sentenced her to ten years in prison?

Learn more about Ginger Simpson on her website and blog Dishin' It Out. Ginger's other site let's it all hang out, My Place to Rant but don't go, if you don't respect differing opinions!

I'll be back Friday with KC KENDRICKS. Until then...

Sloane Taylor
Sweet as Honey...Hotter than Hell
www.sloanetaylor.com
Posted by Sloane Taylor at 7:39 AM