The Queen of Hot, Jan Springer, is back with a new release guaranteed to singe your Kindle.

Dark Heat contains sensitive matter such as forced seductions that is integral to the story. Please use your discretion if such content offends you.

The heroes have a human female give their heroine some sexy loving in a short f/f scene.

They were all I needed to ensure I'd enjoy this well-written novel. 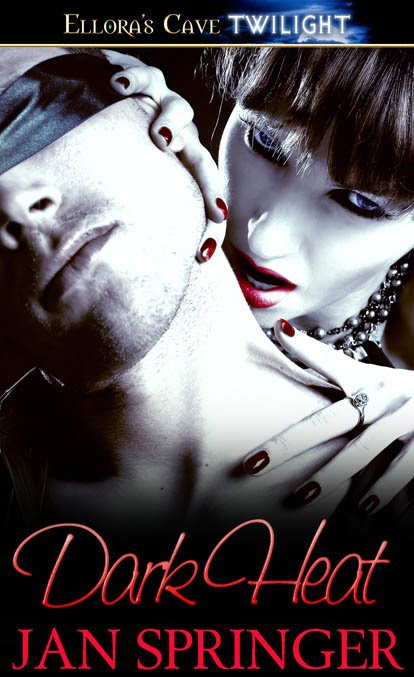 BLURB:
Warrior Queen Megan Bloodrayne was betrayed by her two forced mates. Fleeing them, she hides within Vampira, a secret coven of vampires who live undetected among the humans.

Recaptured, Megan is horrified to learn she’s been framed for crimes she did not commit. Her mates, kings Christian and Zane, believe she may be a traitor and they’ll try anything to get the truth out of her. Megan’s got a secret and she’ll do anything to keep it, including enduring scorching sessions of red-hot sexual torture.

EXCERPT:
Run! Her mind screamed. But to where?

They had her cornered. She realized her mistake now. Upon climbing to the mountaintop she’d ventured out onto a peninsula. Three sides were severe drops of thousands of feet onto solid rock that would kill even a vampire. She was also upwind, that’s why she hadn’t smelled them.

Damn stupid vamp! She couldn’t have been more foolish if she’d tried. They must have been watching her. Waiting for the right moment. Laughing at her stupidity.

Despite the fear curling through her like a suffocating blanket, she recognized the two males who had come to the alpine house that one morn. Yet if only they’d met in another less threatening way…

“Do not do anything foolish, female.” The younger of the two spoke with softness as if trying to gentle a frightened mare. But she was no mare submitting to a ride.

“I warn you. I will not hesitate to kill both of you before you touch me.” She held her spear up in a threatening manner. The males didn’t flinch at her threat. If anything the young one looked worried as he cast quick glances to the cliffs on each side of her, obviously fearing she might jump to her death. If they would be so lucky. Ha!

He found her amusing? Did he not realize she could sail her spear through the cold mountain air and pierce his spine, shattering it? Vampires were a strong breed, but a shattered spine would most certainly kill the brute. Even he could not regenerate that quickly to avoid death.

No, she didn’t want him dead, he was much too fine a male specimen. She would find another way to escape.

“Perhaps a good fucking by both of us will calm you, my Lady,” the older suggested. She trembled under his magnificent lusty glare and realized he must have the gift of mesmerizing.

Oh shit, she thought, using the human term she found quite effective when she was in trouble. If she didn’t break eye contact with him, she would be easily taken. And yet, under his stare, she wanted to be taken. By both of them. Just as he’d suggested. Taken at the same time. Over and over again.

Naked male flesh slapping against her. Huge, powerful hands holding her ass steady. One of them plunging into her pussy. The other one coming into her from behind.

Megan caught herself and closed her eyes in the hopes of breaking those naughty thoughts. He must have put the suggestion into her mind. He must have! Wanton heat spiraled through her and hot moisture pooled between her thighs. Her nipples felt so terribly hard and her breasts pleasantly heavy and swollen.

If they captured her she would lose her new-found freedom but maybe gain sexual freedom. The thought came upon her so quickly and so silently she didn’t even realize the two males were several steps closer to her until she opened her eyes again.

For deeper insight on what makes the Queen of Hot so hot, check out Jan Springer's website. Once there, click on blog in the header for more entertaining reads.

Sloane Taylor
Sweet as Honey...Hotter than Hell
www.sloanetaylor.com
Posted by Sloane Taylor at 8:55 AM