ONCE UPON A SECRET

Christiane France, author of cool mysteries and hot romance, truly believes love makes the world go round, so she likes stories with both happy and bittersweet endings. Christiane has been writing romance for the past twenty years and lives in Canada, near Niagara Falls, with her husband and The Boys—two black and white Persian cats.

Here's a peek at Ms. France's latest release which I do believe you'll love. 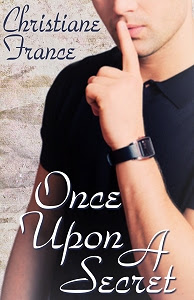 BLURB:
The last thing Luke Fiorelli wants to do, being a member of a close-knit immigrant family living in the Italian neighborhood of a small town, is embarrass or upset them by openly declaring his sexuality.

Moving to the big city isn’t an option for a couple of reasons: he owns a successful landscaping business, and his family wouldn’t understand him relocating on what they would interpret as a whim.

By convincing himself that his strait-laced father would kill him if he ever found out about Luke’s sexuality, and satisfying his needs with the occasional weekend trip out of town, Luke has never had a problem keeping that part of his life a deep, dark secret.

That is, until he meets handsome and openly gay Travis Barrington III. The attraction between the two men is strong and instantaneous, and suddenly Luke is scrambling to invent even more excuses to keep his secret.

Travis, however, knows all about secrets and the harm they can do, but can he convince Luke to accept that and step out into the light?

EXCERPT:
Luke Fiorelli watched Travis Barrington III across the makeshift desk in the construction site office, fascinated by the movement of the man’s nicely manicured hands as they sifted through the contents of a file. He swallowed hard, desperate to deny the shiver of awareness that heated his blood and sent his thoughts skittering in directions they had no business going.

He’d first met Travis a couple of months ago, at Barrington Properties’ corporate headquarters in downtown Rock Bay. Travis had personally taken delivery of Luke’s last-minute bid to landscape the grounds at what was to be the jewel in the Barrington crown, a new hotel on the coast a few miles north of town. Luke had hoped his bid would be successful, but he’d long ago learned not to expect miracles. Competition was stiff for plum commercial jobs like this and there were dozens of landscaping companies more experienced and better known than Fiorelli Exteriors.

However, in the split second it had taken for that envelope to change hands, something had passed between himself and Travis, and Luke had known for an absolute fact that the job would be his. He couldn’t explain how he’d known; he just had. Maybe it was what the experts labeled a moment, a flash of precognition that sometimes happened, or good old-fashioned e.s.p. Whatever it was, less than a week later, Travis had called to confirm Luke had indeed submitted the winning bid.

It had happened, it was over, but the incident still continued to bother Luke. He didn’t have moments or suffer from ESP. Even so, something must have triggered the sudden feeling of knowing the future, and he didn’t have much to choose from. There had been the initial, brief but all-encompassing eye contact with Travis that made Luke feel as if he’d been swallowed whole. Then the zap of electricity traveling up his arm as their fingers touched when Travis took possession of the package. Then again, maybe it had just been one of those weird, inexplicable things that happen but defy all rational explanation.

Whatever it was, from then on, any time Luke ran into Travis, he started feeling wary and off balance, like he was walking on eggs, or balancing on the edge of a cliff. And it didn’t help in between those times he couldn’t quit thinking about the man or having ridiculous dreams where the two of them were locked together in a passionate embrace.

Travis was handsome, rich, a real player by all accounts, and totally out of Luke’s league. The last person on earth Luke would want to hook up with, yet his fingers itched to touch his skin, to get naked with him. He wanted to run his fingers through the man’s long black hair and kiss his wide mouth. He wanted to taste him and—
Just then, Travis looked up, a faintly troubled look on his handsome face, giving Luke the craziest urge to just walk around the desk and solve whatever was bothering him with a reassuring hug. However, while Travis made no secret of the fact he was gay and proud of it, Luke was not. Hell, there were times when Luke wasn’t even sure what he was. Although that wasn’t exactly true. He’d done enough messing around, first in high school and later in college, to be very sure.

However, he’d grown up in a family with strong conservative values and strait-laced views on just about everything. He didn’t need to hear his dad’s views on homosexuality to know the way he and his friends thought. It was something decent people didn’t talk about, so telling his parents had been totally out of the question. As a result, Luke’s almost non-existent sex life was, of necessity, restricted to DIY and weekend trips out of town to somewhere like L.A., Vegas, or San Francisco.

If his secret ever got out… Luke shuddered inwardly at the very thought. His dad would kill him. Guaranteed.

Learn more about Christiane France and her outstanding books on her website.

I'll be back Monday to share a restaurant review. Until then...

Sloane Taylor
Sweet as Honey...Hotter than Hell
www.sloanetaylor.com
Posted by Sloane Taylor at 7:46 AM