Marie Treanor's new release is guaranteed to provide thrills and chills in all the right places. Wolf Hunt is a highly sexual, well-written novel centered around an awesome world. This is a book you want to read. 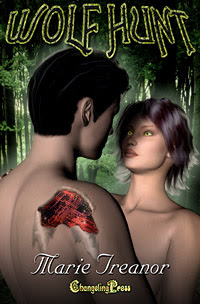 BLURB:
Who's hunting whom?

Human-wolf hybrids have been created by a top secret government project. Jon, Linnet and Yuri, once the military's finest, are released into the world to find and destroy alien infiltrators. But the task is not so simple when the wolves begin to think for themselves, and their missions are complicated by attraction, sex and divided loyalties.

A man wakes up naked and alone in a city doorway -- with no memory of how he got there or who he is. For journalist Rose Winter, a wolf story begins to converge with the sexy naked man she's trying to help. And her own secret becomes impossible to keep.

The werewolf Linnet is in season, and her desires fix on Louis, an alien android who serves Gardenian infiltrators. But is it right to make use of a sentient being just to fulfill her sexual needs? Linnet soon discovers Louis has needs of his own...

When the rebellious Senator Cereza is put in command of the Gardenian invasion fleet, she wastes no time in capturing the mysterious space pirate captain Yuri. But the tables are quickly turned. Taking Cereza hostage is necessary to Yuri. Seducing her isn't part of his plan, not when his wolf is liable to tear her apart and the fate of two peoples is balanced in their hands.

The female voice seemed to cut through his skin. Clear, brisk, curious, with a warm pitch that spoke straight to his cock. Or would have, had that organ not been so shriveled with rain and cold. A ripple moved through the hostile crowd. Voices muttered and he had to strain to catch the words.

"She's that girl on the newscreens. Shit, she's probably got a camera. I'm off..."

Threatening arms in the crowd lowered. Stones dropped casually on the ground with a scattering of dull thuds and several people drifted away.

A young woman emerged from the dispersing crowd, pushing down a rain hood to reveal luxuriant long hair of a bright and rare shade of amber, falling around a face that he supposed was beautiful. Certainly, her bone structure was exquisite, her lips full and tempting, her eyes large and brown...

But it wasn't her beauty or her melting eyes that truly caught his attention. It was her smell. Frowning, he tried to place it. Did he know her? Surely that scent was familiar... Something about it filled his mind with visions of naked, sweating bodies, mainly his own and hers.

She came to an abrupt halt and stared at him. Oh yes, she was highly fuckable, and yet, stronger than his upsurge of unexpected and inconvenient lust was the desire to put his hands around her elegant, swan-like neck and strangle her.

He flexed his fingers.

The older woman was explaining. "Art found him asleep in his doorway when he came home from night shift. Must be a drunk or a down-and-out, some kind of pervert too. Look at him!"

After her first flickering glance, the newcomer seemed to be rather determinedly focusing on his face. "He must be freezing," she said unexpectedly. In an instant, she'd stripped off her raincoat, revealing an orange bodysuit that seemed to match her hair, and bright, chunky beads around her throat. She advanced upon him.

He fell back, giving ground before her as he hadn't before the stone-throwing mob.

His throat closed up. Panic threatened to resurface. Her eyes searched his. Every hair on his body stood up in alarm. Though he'd no idea who she was, either, his every instinct was against trusting her.

"Where does he live?" she flung over her shoulder.

Silence and a few shrugs. "Why's he scared of her?" someone muttered.

Scared? Was he? Forcing himself, he stayed still when she took another step nearer to him. Maybe. But it felt like a powerful tug of lust. Mixed with an equally strong urge to exterminate her.

"He's not scared of her," answered another voice with a definite snigger. "He likes her."

She heard them. He could see it in the color soaring into her neck and face. He even admired the way she deliberately didn't so much as glance at his growing cock. And yet it didn't embarrass him. Perhaps he was an exhibitionist after all.

You can find out more about Marie Treanor and her books on her website.
Catch all her latest news on Facebook. Be sure to join the party on her new blog: Marie Treanor's Romantic Theme Party.

Have a great weekend. I'll be back Tuesday with a new teaser. Until then...

Sloane Taylor
Sweet as Honey... Hotter than Hell
www.sloanetaylor.com
Posted by Sloane Taylor at 7:20 AM