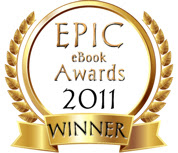 That's just what my writing partner, the brilliant and versatile Robert Appleton, is now able to do. His based on true events book, Sunset on Ramree, is the first place winner in the Historical Fiction category for the 2011 EPPIE Awards. Congratulations, Rob!!

BLURB:
It is the deadliest crocodile attack ever recorded. On February 19th, 1945, one thousand Japanese soldiers retreated into the fetid mangrove swamps of Ramree Island hoping to escape their British enemy. However they soon discovered that the sixteen kilometre stretch of marshland that promised to offer safe cover, had delivered them straight into the jaws of hell.

Inspired by true events during WWII, Sunset on Ramree follows young musician-turned-soldier Shigeatsu Nakadai and his best friend, Kodi, as they head ever deeper into danger.

EXCERPT:
Lance-Corporal Hokuto Mayazuki has always been one of the luckiest soldiers in the Japanese Imperial Army. The scars of no less than six shrapnel cuts and bullet wounds tattoo the left side of his neck, all the way from ear to shoulder. So many miraculous escapes over a three-year tour of duty in the Pacific. Yet he will be among the first to die this evening--according to the medical officer--though not from any wound.

Today is February 19th, 1945, and he is succumbing to a strange, horrid fever. If one so tough can fall easily, I tell myself, what chance have any of us, retreating into these deadly marshlands of Ramree Island?

It is 16:45 and the British forces have outflanked us. Word spreads throughout our battalion that there is no escape. The mangrove swamp--a thick, stifling, fetid place of only damp reprieve--suddenly provides our only protection. And it is here, in the coming hours, that from the jaws of our defeat, Nature will try to snatch us for Herself. There are a hundred unseen ways for a man to die. We can never give in and time must therefore be the grind of the blade, that by our own hand we draw death--an honourable death. What end waits for me, I wonder? My name is Shigeatsu Nakadai. I do not want this sunset to be my last.

The water I pour onto my neck to drown a dozen large ants is drinking water. I curse the decision. From here on, saltwater is all we'll find. When my canteen runs dry, I'll start to die of thirst. The thought occurs to me to pilfer some of Mayazuki's--he's almost dead anyway--but the reasoning proves double-edged. What if he contracted his disease from that water? Is it worth the risk? Thirst or fever: in prolonging life by one means, might I not simply protract death by another? I decide to leave him his flask and take his can opener instead.

We've been rushing for hours. Our battery stronghold is now miles to our rear. Colonel Ojihoru is a determined man, but determined to do what? If we are not permitted to surrender, and there is no way through the British lines, what is his hurry? Suicide now or suicide later, it seems academic. Stoicism is my only refuge. It's as much a performance as those I give each night in my dreams--in the orchestra of Chadwick Hall in Canberra, where I play the clarinet--except this performance is to myself. Of all the ways to leave this swamp, suicide is the most impossible, at least to me. I'm quite sure that when the time comes to die with honour, I'll cry in front of the whole regiment. Will I be the only one?

Colonel Ojihoru never hesitates. Though he's knee-deep in swamp water, his feet remain on firm ground. That is his constitution. Lieutenants Katsumoto and Tanaka both salute as he points them, respectively, to the northeast and southeast corners of our retreat. As far as I can tell, we're trekking east. I catch up to Katsumoto as he clambers over a fallen tree in the water. He is my friend. Ever since he learned of my civilian profession, he's expressed a desire to hear me play the clarinet. I have surmised he is a well-educated, cultured man, both by his eloquence and his even-handed approach to leadership. Unlike Ojihoru, Katsumoto is liked as well as respected by the men.

"Sir, is it true we're surrounded on all sides?" I ask.

"Hmm ... would you like the long version, Nakadai, or the short?"

"The easiest to swallow, sir."

"Very well," he replies matter-of-factly. "There are British troops to our rear, and we think a British-Indian contingent may have landed to the east. Reaching General Ushui now seems unlikely. All we have right now is this swamp, and no intention of surrendering. Keep your wits about you, Nakadai; this place can kill a man on a whim when he isn't in the middle of a war. My advice is to pick someone you trust, stay close, and watch out for one another. Oh, and steer clear of the deeper water."

With that, he pats me on the shoulder and wades out into the swamp. I think about reminding him of his own advice--to stay away from deep water--but he has no alternative. There is no way round. A dozen or so mosquitoes emerge from a nearby bush. They plague Katsumoto until he disappears from view. I see endless greens and browns suffocating our route, and no sign of life save one or two of our number creeping nervously through the water. Their eyes hardly look up. What's lurking beneath the surface? I hurry back to dry land, back to my friends on whom I count to keep me safe.

I'll be back tomorrow with a new Tuesday Teaser. Until then...

Sloane Taylor
Sweet as Honey...Hotter than Hell
www.sloanetaylor.com
Posted by Sloane Taylor at 8:13 AM