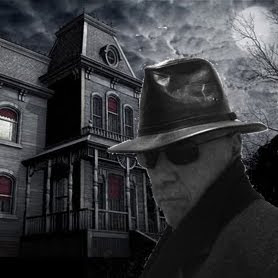 The Psycohouser knows your fears and takes you one step farther into the darkness. This eerie person looks deep into your soul and has the ability to control all your emotions.

A talented author that knows how to grab and hold his readers until the very end of each of his well written novels, the spell-binding Cornell DeVille

here to thrill and chill you with LOST IN THE BAYOU, an awesome YA story that captivates readers of all ages.

Not familiar with Cornell and his work? DeVille considers himself an Imagination Director. A member of the Baby Boomer generation, he was influenced by the state-of-the-art technology of the fifties—television. He was influenced by the great storytellers of the day, including Hollywood icons like Walt Disney, Alfred Hitchcock and Rod Serling. Rather than spend his summer days outside playing baseball, Deville preferred the world he could find within the covers of a good book. At an early age, he fell in love with the works of Jules Verne, Edgar Allen Poe, Robert Louis Stevenson, and H.G. Wells.

Early memories remained with him throughout the years and continue to influence his writing today. A lover of adventure, mystery, and fantasy, DeVille’s writing leads the reader on a journey that allows them to escape the real world and venture into a special realm where anything can happen.

DeVille grew up in the Kansas City area, where he lives today with his wife Rosie, their bichon-poodle Hannah, and a Himalayan Persian cat named Billy. 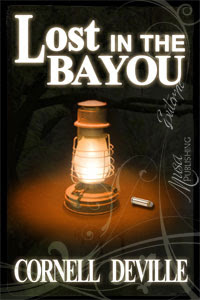 The bayou is a risky option. But becoming alligator seems a lot less terrifying than what’s waiting in the cellar.

BLURB:
People disappear in the bayou. And that’s exactly what fourteen-year-old Robin Sherwood needs to do — before her Uncle Conrad snips her toes off with his rusty garden nippers.

When her parents’ private plane disappears in the Voodoo Swamp, Robin’s uncle moves into the multi-million dollar Sherwood Estate as her guardian. It doesn’t take Robin long to figure out there’s something not quite right about Uncle Conrad — besides having a metal claw where his left hand used to be.

Weird changes to crazy when he explains the bizarre game he has planned — a game that will leave Robin dead and Uncle Conrad the sole heir to the Sherwood fortune. In order to escape his devious plan and its deadly consequences, the bayou may be Robin’s only chance. It’s a risky choice, but becoming alligator bait seems a lot less terrifying right now than what’s waiting for her in the cellar.

EXCERPT:
In Louisiana, summer wraps around you like molasses. Thick and sticky. July is hot and humid. Always. August is worse. And the summer of 1963 has been a record breaker so far.

This morning, the sky is cloudless. It’s muggy, and there’s no hint of a breeze to blow away the pestering flies or the lingering stench of whatever crawled under the porch and died a few days ago. The only possible relief in sight is a dark bank of clouds in the south over the bayou. If it holds together, we may get a storm later tonight to cool things off. I hope so.

The rhythmic buzz of locusts fills the air, but it stops suddenly as a deep rumble comes up the road. My heart races as the sound rolls across the terrace and toward the covered veranda where we’re waiting.

There’s an uncertain look in Andy’s eyes when he glances up at me, and his voice is thin as water when he speaks.
“He’s coming.”

“It’s going to be all right.” I squeeze my younger brother’s narrow shoulders and give him a reassuring smile while trying to hide my own fear of what’s heading toward us. Since our house is quite a distance from the wrought-iron entrance gates of our estate, we have a minute or so before the car gets here.

When I turn around and glance at my reflection in the window for one final check, the awkward image staring back at me is disappointing, as usual. Being fourteen is frustrating. Honestly. I’m all knees and elbows, and the white dress makes my freckles show up too much. The permanent made my hair way too kinky. And my eyes are puffy from crying all night.

But I’m stuck with it for now. That’s another bad part about being fourteen: You can’t change anything. And there’s nothing I can change now before the car carrying our visitor gets here—including the fact that the court has appointed him our new guardian.

Andy stares down the long driveway toward the entrance, waiting and watching. When I spin him around to adjust his necktie, big-eyed smiling frogs stare back at me. Frog neckties must be the rage with eleven-year-old boys this summer. Actually, I don’t know why I’m even bothering. His tie is a clip-on. There’s nothing to adjust.

My fingers scratch through his scruffy blond hair to make it look as if someone combed it. A quick swipe of my hand wipes away the tiny beads of sweat glistening on his pink forehead. If Mom were here, she’d open her purse and pull out a Kleenex, lick it, and scrub some dirt from our faces—that special dirt only mothers can see. It always embarrassed me when she did that, but I wish she were here to do it now.

The sound is getting louder. And closer. The locusts have gotten used to it and started buzzing again, their cadence in time with the seconds ticking by. Andy and I stand side by side at the porch railing, waiting to face whatever the future has in store for us.

Posted by Sloane Taylor at 9:31 AM