He's Debonair and All Male. Introducing... 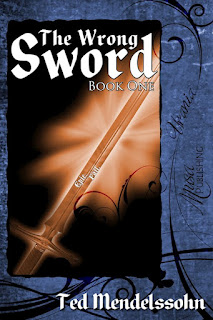 Henry the Rat, one of the protagonists of Ted Mendelssohn's debut novel The Wrong Sword.

So, Henry, why do you think Ted chose you to represent him?
Just lazy, I guess. I do the work while he takes the credit. Writers! Oh. You mean, why did he choose me instead of another character?

Um, yes. For instance, why not the Princess Mathilde? We understand she was very eager to do this interview.
I’ll bet. She never met an audience she didn’t like.

That’s an odd statement. We thought that you and she-
Shutupshutupshutup! Listen, she's a princess, I'm…really not. So just be cool. We're on the sub infra.

Okay. So, the other woman in your life-
Is a sword. Yes.

You don’t sound very excited. Most warriors would kill to get their hands on a weapon like that.
Do I look like a warrior?

Frankly, no.
If you saw me in a dark alley, what would you do?

Check our wallet to make sure it was still there.
Exactly. Did you know the sword talks to me?

Really…
Stop edging away like that. I’m not crazy. It’s a magic sword. And it never lets me forget it. Do you know what was carved into the stone where I found it?

“Whosoever Pulleth the Sword From out the Stone Is Rightwise Born King of all England”?
No. “Hic gladio facit magna dolor in natibus.” You do the Latin.

This interview seems to have gotten a little off-track. Why don’t we go back to the prepared questions?
It’s your farthing.

When you were born?
Six years before Young King Harry of England burned my village to the ground.

Okay, moving on, why should readers be interested in your story?
Evil princes, killer monks, hair-raising escapes, and the medieval version of three-card monte. Plus automatic shepherds.

Sounds fun.
Well, from my end of things, it's scary as hell. But if you're just reading it while you're safe and cozy at home, you'll have a great time.

For a thousand years, Excalibur has been the sword of heroes. Unfortunately, its new owner isn’t one.

BLURB:
Ever since he arrived in Paris, Henry the Rat has made a pretty good living selling "magic" swords to gullible knights. But when Henry sells one to Geoffrey Plantagenet, brother to King Richard, his happy days are over for good. Geoffrey forces Henry into a dangerous, uncomfortable quest for the most famous magic sword of all time, Excalibur, even though Henry is certain that it's just a myth.

Then Henry actually finds Excalibur - and his troubles really start: For Excalibur is not just the sword of heroes...it’s also the sword that won’t SHUT UP. It communicates with its owner, it knows what kind of owner it deserves, and Henry doesn’t even come close.

To keep Excalibur and the world safe from the appalling Geoffrey, Henry will have to masquerade as a knight, crash a royal wedding, rescue a princess, break a siege, penetrate the secrets of the Perilous Brotherhood, and find Excalibur’s rightful bearer, all while trying to reach an accommodation with a snotty, aristocratic hunk of steel that mocks him, takes over his body, and keeps trying to turn him into the one thing he hates most...a hero.

After working as a lighting technician, a story analyst, and a paid Blackjack player, Ted Mendelssohn now writes ad copy and and speculative fiction, two entirely different kinds of imaginative literature. He lives in New York, is a graduate of several prestigious institutions of higher education, and knows the difference between a claymore and a pike.

Learn more about Ted and his uber creative work on his blog The Sword That Nagged.