The Birth of Jack

It was the last night of the 2011 World Fantasy Conference. People were milling about waiting for the dog-end parties to start. While sitting around outside the (now former) hospitality suite, we started gathering in ones and twos, then pulling people in at the rate of threes and fours to go out to dinner. Finally we had a group of about fourteen women. We weren’t trying to exclude men, it just happened that way. Sick of the resort food and bad service, we decided to walk out to a little cafe nearby for dinner.

Over dinner, references kept being made to Grace’s, aka Goldeen Ogawa, “sword story.” We’re a group of writers, so, the chances of that story going untold for long weren’t high. After much prompting (really more than it should have taken given the aforementioned group), Grace told the story of the night she used a sword to fend off a drunk on her back deck.

When we'd finished wiping the tears from our eyes, someone said, "You know, Goldeen, when you tell a story like that at a table full of writers, you're going to see it in multiple forms over the next year!"

"Anthology?" murmured someone else. 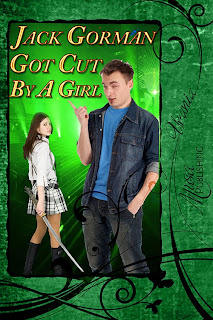 One of the ladies at the table was Celina Summers - of Musa Publishing! Celina agreed that there should be an anthology, and heck, since she was a publisher, she was going to publish it. The Jack Gorman Project was born. Some of us were published writers, others weren’t. It didn’t matter. Celina set a submission deadline and laid down some very basic ground rules: (1) Jack must be cut by a girl in every story; (2) Jack could not get laid; and (3) Jack could not die. We changed Jack’s name and some of the details of the “attack” to protect the somewhat innocent. Then we were off and running.

Months later, the six of us saw the other stories for the first time. Even though we’d all started with the original story and the same broad guidelines, the stories were very different. Even better, there was a natural progression. Somehow, Jack was mostly the same across all the stories. We did some fine tuning to make sure Jack’s quirks were the same in all the stories and that the transitions were smooth. And following Jack across time periods, magical worlds and into deep space was fascinating.

Now it was time to pull the anthology together. Several Skype calls later, we had the theme:

Karma's a bitch, and Jack Gorman’s about to find out how much.

We hope you like reading about Jack and his exploits as much as we liked writing about him. Here is a little to entice you.

BLURB:
Jack Gorman would rather spend his time swilling brewskies, scoring with the babes, and watching football. Instead, he's been cursed by sword-bearing girl he harassed while on a bender.

Now, karma is dragging Jack's sorry ass across time, space, and alternate histories. The curse can be broken if Jack manages to learn his lesson, but Jack is nothing if not consistent. From small California towns to a steampunk past, a magical future, and a space odyssey of narcissistic proportions, Jack flirts and drinks his way across reality only to discover that girls with blades are everywhere.

Will Jack ever break the curse? Or is he doomed to an eternity of getting cut by girls? Regardless, Jack still can't get a break. As he learns the hard way, karma kicks ass in all timelines.

EXCERPT:
Two days later, the Sheriff’s Deputy came by our house. He is a big man, not easily flustered.

“I’ve got a few questions about the report you sent in,” he said, holding up a printout of my email.

“Yes sir,” I said, all cooperation, and launched into a recount of my misadventure. I had barely got to the part where I encountered the unfriendly drunk when he stopped me with a wave of his hand.

“Wait, wait, wait,” he said, shaking his head. “You mean to say this happened here?”

The deputy slapped the email printout against his thigh in frustration. Shaking his head, he said: “That Jack Gorman, I’m just sick of him. He came to me, you know, saying he was attacked by a gay guy with a sword outside the Waterwheel!”

I remained silent. The Waterwheel is a bar almost a mile away. And I am most definitely not a guy.

My mother, who had been listening from the front door, came out and stood behind me. “Um, no,” she said. “It happened here, on our front porch. I heard it.”

“Yeah, yeah, I believe you,” said the deputy, rubbing his face. “Look, clearly you did nothing wrong, but the fact that he filed a report—even if it’s a false one—means I may have to confiscate that sword as evidence. You’ll get it back,” he assured me, “don’t worry.”

Ultimately, even though my sword was confiscated, I had the last laugh. Walking the dog a few days later I was stopped by my neighbor and asked what the commotion was last Saturday night. I told them.

“Aw man, Gorman messed up bad.” he said. “He’s been going around bragging about how he got attacked by a man with a sword. I’ll never let him hear the end of this: he got cut by a girl!”

What I didn’t tell him, what got left out of the email and my official statement, is what I did after I wrote that original report.

Before I went to sleep that night (and it was a difficult thing to do), I cast a little spell. I had never tried to cast a spell before. I have a friend who is a witch and she tells me I am probably a witch too, just untrained.

So that night I cast a spell. A spell to make sure that if this Jack Gorman was ever going to cause trouble again, anywhere, any time, there would be a girl with a sword (or something similar) to stop him. I also imagined him going away—preferably far away. I imagined him, very clearly, walking away down a dark and deserted road, toward a door made of light,
and a sound like a sword being wiped clean with a cloth.

It probably won’t work, I thought as I went to sleep. But one can hope, right?

To learn more about these terrific authors, please click on their names.