I can’t write a short story to save my life. Seriously. I try every so often, and the typical result is an editor telling me, “Nope, try again.”

That’s what happened with Mrs. Roth’s Merry Christmas. (Actually, that wasn’t the original title.) It started as a little novelette I tried to get in and get out of, and I guess it read that way, too. Calliope’s head editor Jeanne De Vita sent it back to me with a, “Yeaahhhh, no. Try harder,” note [I’m paraphrasing].

I paced for a while and slept on the story a few days, then figured, “Hell, if I’m write campy smut, I’m gonna go for the gusto and see what happens.”

So, I did some world-building, added a jumbo cast (it’s a fantasy, after all), gave the heroine a bit of back story, and maybe bumped the corniness up a little. Ended up with a dandy vigilante Santa, a sexually adventurous teacher with a penchant for holiday sweaters, some back-stabbing nymphs, a bunch of politically-motivated elves, and a traitorous dog.

I think to date, Gillian from Mrs. Roth’s Merry Christmas is probably my number two favorite heroine. She’s got a lot of spunk and takes no prisoners. Here’s a bit of her in action: 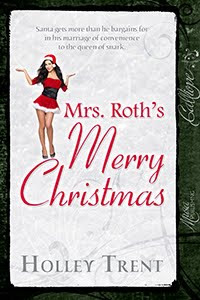 Santa gets more than he bargains for in his marriage of convenience to the queen of snark.

I cut my gaze toward Kori and she shrugged. I hadn’t been at work the previous Friday or Thursday because on Thursday morning I got into a knock-down drag-out catfight with Hortense that spanned ten minutes and two dimensions. She’d shown up at my Zumba class clad in teeny tiny shorts and a tank top that was damned near see-through. I had held my tongue until water break then she walked up to the front of the room and thrust a ring box at me.

“Mother ordered me to give that to you.”

I opened the box to find a large oval-cut ruby flanked by emeralds all mounted in an antique-looking gold band.

Hortense didn’t answer. She was too busy flipping through my CD binder and sucking her teeth at my apparent lack of taste. Kori had walked over, looked inside the box, and squealed with glee.

“I can’t believe Grandmother made her give it up. There’s only two of them. Now she’s going to have to use the portals like the rest of us.”

“Spoil of war. I don’t remember which. Say, you should probably read up on elf history. Anyway, there were two. Grandmother has the other, but she doesn’t use it much. She doesn’t like leaving the palace. Basically, it’ll let you do what Uncle Nick can do naturally—go from one place to another without having to use a portal.”

“Cool.” I’d taken it out of the box and tried it on for size on my right ring finger. “It looks valuable.”

“Of course it is, you gold-digging slut!” Hortense’s head finally popped up.
I’m not exactly sure what happened after that. I had sort of went into a red, violent rage and my body moved on its own accord. She was crouched there in front of the CD player and so I grabbed the base of her ponytail and yanked her backward so her head slammed against the hard floor. From there, there was a lot of scratching and swatting from both parties. When the Zumba ladies started filing back into the studio from the hallway, Hortense and I were on our feet throwing blows in earnest.
My adrenaline must have been so hopped up that it took me a while to realize I was blowing blood out of my nose with every exhalation.

“Uh, ladies?” Kori had tried to intercede. She didn’t want to get too close, though, not that I blamed her. She couldn’t exactly take sides in a battle between her blood aunt and her queen.

I managed to get an arm around Hortense’s neck and dragged her out into the hallway. No one followed. I started thinking about how much I wanted to kick Nick’s ass for getting me into that mess, and the next thing I knew we were in the bedroom of Nick’s winter lodging at the North Pole where he spent most nights, crashing through his glass coffee table.

Fun, right? If fracases are your thing. Now if you want to read another excerpt from Mrs. Roth’s Merry Christmas, please click HERE.

There may be a sequel for next Christmas in the works…me finishing it will depend heavily on whether or not the Mayans were right.

For more on Mrs. Roth and other Holley Trent stories, you visit HolleyBlog. When Holley’s not writing campy smut, she’s Tweeting. A lot. She loves to chat, so please say “hi”!