Dusty Crabtree dropped in today to help me out while I conquer edits on soon to be released novels. Her book and recipe are both awesome. Take it away, Dusty. :) 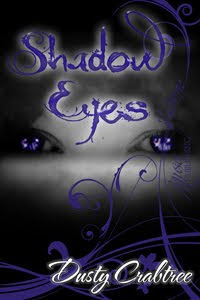 I've been an overly creative person, my mind constantly swimming with artistic things and creative ideas. Before I started writing, that creativity often found an outlet in cooking. I started with intricate recipes, then added my own spin on them, and turned some of them into my own.

This is one of my favorite creations, mainly because I absolutely love berries and chocolate together! It's tart and fruity with the intense dark sweetness of chocolate.

Also, seeing as how Iris, the main character in my YA urban fantasy Shadow Eyes, has violet eyes and her favorite color is naturally purple, I thought this strikingly dark purple pie would definitely be fitting. I hope it wins you over like it would Iris.

After about 1 hour, top with whipped cream and dark chocolate shavings. Continue to refrigerate for another 3 hours or until set.

While the pie is chilling, pour yourself a lovely glass of wine and curl up with Shadow Eyes.

Iris thought she could ignore the shadows...until they went after everyone she loved.

BLURB:
Iris Kohl lives in a world populated by murky shadows that surround, harass, and entice unsuspecting individuals toward evil. But she is the only one who can see them. She’s had this ability to see the shadows, as well as brilliantly glowing light figures, ever since an obscure, tragic incident on her fourteenth birthday three years earlier.

Although she’s learned to cope, the view of her world begins to shift upon the arrival of three mysterious characters. First, a handsome new teacher whose presence scares away shadows; second, a new friend with an awe-inspiring aura; and third, a mysterious and alluring new student whom Iris has a hard time resisting despite already having a boyfriend.

As the shadows invade and terrorize her own life and family, she must ultimately revisit the most horrific event of her life in order to learn her true identity and become the hero she was meant to be.

EXCERPT:
I meandered slowly to my locker. Even though I didn’t need anything, I rummaged through it as if I were searching for a tool on a job that paid by the hour. The longer I waited, the less people and, therefore, shadows would be waiting for me when I stepped into the parking lot.

I hated crowds and tried to avoid them as much as possible. Three years of dealing with the visions had taught me how to cope in various ways, but I’d never gotten used to walking among herds of people that were ignorant of the truth I was forced to see. It was like being the only one wearing ultraviolet glasses that unveiled every germ and bacteria around me and having to constantly witness unsuspecting people touching things and getting into things that are disgusting and potentially dangerous. Some people would feel lucky to have such insight. Me? I felt trapped, helpless, and exposed.

Luckily, since it was Friday, everyone wanted to get away from school as quickly as possible. By the time I stepped outside, the parking lot was basically empty. Only a few cars belonging to football players remained.

I began to trek the long distance to my car, which was at the end of the lot due to my near tardiness every day for the same reason I always left late. However, even though the lot was void of people, a couple of dark figures loomed over and around a yellow Camaro to my right. I recognized it as Marcus Beaman’s new car. He was a well-known football player and had been bragging about the birthday present for three months since he got it in June.

Why were these shadows out in the parking lot without any humans around? The bizarreness of it made me pause, and my mind began fabricating all possible explanations—none of which I could do anything about. Lost in my thoughts, I must have peered at them with critical eyes just a tad longer than was safe. One of them stopped, inclined its head to glare at me, and flashed an evil grin. I shuddered, closing my eyes tightly in an attempt to erase the image and pretend the scene away as I cowered toward my car like a timid little girl.

I threw open the driver’s side door, jumped in, tossing my backpack on the passenger seat, buckled my seatbelt, and locked the doors. As if that would help.

I'll be back Monday with the Queen of Hot Jan Springer. Until then...