There’s this bit in my new release Her Resident Jester where my protagonist, Shane, waxes poetic about her identity:

I’d almost forgotten about that ultrasound. I didn’t generally volunteer for medical studies, but one of my coworkers’ kids was on the investigative team and I got strong-armed into it because I’m from an underrepresented ethnic group. That is to say no particular ethnic group. I’m more mixed up than Vin Diesel, but far less coy about it. I leave that to Marcia. She’s really uptight about that sh*t.

Shane and Marcia are sisters (you’ll meet Marcia formally in April in Love by Premonition), and constituents of the Great American Melting Pot. They can’t simply itemize what they are, because at some point in the family tree the colors blur. They’re sort of a lot of things and nothing in particular.

Shane’s fine with that. She’s okay with her ambiguity and having people ask her about it. Culturally, she’s North Carolinian, Southern, and American. Marcia is far more sensitive about her perceived identity. She’s not self-hating, exactly, but as a lapsed physicist, she sort of likes being able to put things into neat little boxes. So, when people question her on what she is (and isn’t), she dances around the subject and deflects. It’s not easy for her to answer, and she doesn’t like other people guessing about it, either. She could hedge and say “I’m black,” but she isn’t. Bi-racial wouldn’t be accurate, either. Tri-racial would work, but it’d be imprecise.

Shane doesn’t mind imprecision so much, but it makes Marcia twitchy.

I made this a “thing” with Marcia because I think people should sometimes come in shades of gray (even if they don’t have cool names for themselves like Cablinasian)…and I think sometimes they should be sensitive about not having a tidy label.

Although I identify very well with characters like Shane and Marcia (good luck trying to itemize all my components), they make requesting cover art extremely tedious. I could spend an hour scanning through stock art depositories looking for models who are suitably ambiguous and only come up with one or two. 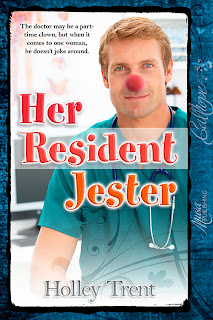 For Her Resident Jester, we stepped around that casting issue and put the hot doctor Derek on the cover instead of Shane or a couple. (Isn’t he pretty?) We’ll see what happens with Marcia’s story.

Here’s the gist of Her Resident Jester:

Out of sorts, and in a moment of spectacular tactlessness, she insults a man wearing a red rubber nose and big floppy shoes. He turns out to be Derek Palmer: Edenton’s hottest young surgeon…and the resident observing her operation.

With her body and pride both on the mend, Shane hides out to prevent further humiliation. She can’t avoid the gorgeous clown too long, however. Edenton is a small town, and Derek isn’t content with letting her wallow. What kind of clown would he be if he did?

Her Resident Jester is available for purchase in most major eBook formats at the Musa store and also at third-party retailers like Amazon and All Romance eBooks.