Is There Ever A Perfect Lie?

The answer is revealed in my new release Perfect Lie, available from Musa Publishing.

The Magnificent Men of Munich saga continues with a new addition. Book three brings us suave Max Brewer, better known as Heicke to his throng of ladies, and Francine Daniels, a spitfire he can't seem to tame. 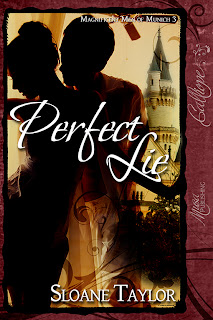 A seedling of doubt will unravel even a perfect lie.

BLURB:
After two ex-husbands and a con artist, Francine Daniels has had it with men. Her life is finally the way she wants it — successful and complete. At least she thinks so until a working vacation in Munich brings her face to face with a sexy German hotelier who sees right through her brash exterior and makes her sizzle with his every touch.

Heicke Brewer enjoys his playboy image along with the collection of international beauties on his arm and in his bed. They are safer than another disastrous marriage. Until a chance encounter with a stubborn American pixie too hot not to handle threatens his hard won resolve.

As passion grows between Francine and Heicke, deception threatens to tear them apart, forcing them to fight their way through a perfect lie.

EXCERPT:
Hands clenched at her sides, she stretched to her full five feet three inches. With the movement, her breasts thrust forward and her hard nipples rubbed against the soft fabric of his shirt.

“I’m Francine Daniels and I work with Teddi Howard-Stiefle.” She almost burst into laughter at the shocked look on his face. “Anything else you’d like to know, Pup?”

He trailed his warm palm up her arm, his touch gentle, almost welcome.

“You are freezing.” He took both her hands in his and rubbed them. She pulled back, but he tugged her closer, wrapping his arms around her, enveloping her in a sensual blend of wet and man. “Pixie, I have no intention of harming you, but you need to get warm.”

His body heat and sexy accent conjured up pictures in her mind best ignored. She raised her head to avoid his crisp chest hairs that tickled her cheek, only to be lip level with his dark brown nipple. It looked so tempting. Tasty. Get your brain out of your silk panties.

He rubbed up and down her back, his fingertips grazing across the swell of her ass. His hands slowed to a sensual massage, warming her skin, sending electric shocks to her vagina. He pulled her tighter, his rock hard cock pushing against her stomach. She gasped as her body declared all out war on her common sense, leaving in its trail a burning desire to let herself go. Just this once.

Her breasts grew heavy, aching with each breath she drew. She squeezed her thighs together. Tight. Anything to stop the pressure building in her clit.

He raised her chin and stared deep into her eyes as if he were searching for her soul. After a long moment, while the world stood still, he touched his lips to hers, almost as if he were afraid his strength and size would hurt her. She wanted, no, needed more. Wrapping her arms around his waist, she hooked a thumb in his belt loop and molded her hips to his thighs.

His hands slid under her shirt, skimming upward. She shuddered from the sheer pleasure of his skin against hers. He glided his fingers up her back and flicked her bra hooks. She trembled again, only this time from anticipation. He grazed his fingertips along the sides of her breasts, then cupped them and rolled her nipples between his index finger and thumb. She clutched his back for support, afraid to let go. Afraid it would end.

She moaned as his hot tongue swiped across her lips then opened her mouth, hungry for his taste. Hungry to feel him inside her.

He grabbed her shirttails and drew them over her head. The chilled air stung her burning skin, but did little to cool her.

“You are so beautiful. So perfect.” His husky voice barely a whisper.

One thumb glided over her left nipple, shooting desire throughout her body, and she arched her back from the intense pleasure of his touch. He raised her right breast to his lips and kissed the tip, nuzzling her swollen areola. He devoured both of her nipples, sucking and tugging on them until …

Sloane
Posted by Sloane Taylor at 6:47 AM