Thanks for popping in. Please meet David Stiefel – arrogant, sexy, and all male. David’s the hero from Heated Negotiations, Book One of Magnificent Men of Munich series. This book is Rated R. 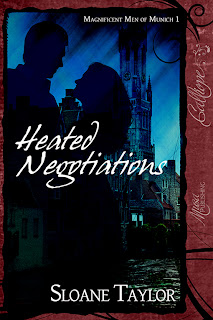 BLURB:
Travel agency owner Teddi Howard is Hell in high heels when she jumps a plane to Munich. Her goal—strangle the German tour operator who reneged on their exclusive contract.

German businessman David Stiefel well knows the feeling of being screwed over and is resolved to avoid emotional attachments. This strategy has served him well, until his chance encounter with the enticing Ms. Howard.

EXCERPT:
His firm hands stroked her soft shoulders while he studied her face in the mirror. She was spellbound by his image—a potent, robust man whose touch was so very gentle.

“What do you see?” His long thick black lashes brushed against her cheek. Her heart pounded at their caress.

Hypnotized, she stared into the mirror and watched him pull one end of his bow tie loose, then remove the shirt stud at the base of his throat. The unknotted silk hanging just below his rugged jaw was the sexiest thing she’d ever seen. Heat spiraled through her and heaviness built between her thighs.

“I see a charming man and a woman acting like a fool.” Her eyelids fluttered shut to hide her embarrassment of wanting him so much.

“Nein, Theodora, I see a beautiful, sensitive woman with a lovely slender neck.” His index finger stroked her cheek, then glided down to caress her throat, a volley of shivers following in its path.

She stiffened just before want and need took control. She raised her head to meet his burning stare. Tonight, she would take control of her life and enjoy this man without any guilt.

“Shoulders that need to be kissed.” His lips did just that while his fingers released the zipper at the back of her dress. Whispered German words caressed her ear as the garment floated to the floor. His eyes skimmed her reflection and when they landed on her garter belt a feral sound ripped from his chest as if he’d been scorched by molten lava. His hand dipped lower and stroked the soft flesh above her stocking then hooked around the clip and gave it a tug. A devilish grin slowly separated his full lips.

She ached for his touch, his mouth, his tongue, anywhere, everywhere. Heat rushed low to the center of her body making her wet as she watched this epitome of masculinity tease her tender flesh.

“Full breasts begging to be stroked.” His warm fingers grazed along their sides and left a trail of heat wherever they fondled. A sheen of perspiration covered her as his sensual words and male scent enflamed her slick vagina to a need beyond any she had ever known. A moan escaped her as his butterfly kisses flitted along her neck and shoulders. She raised a hand to touch the thick hair that feathered against her ear.

“Pale nipples throbbing to be suckled.” The pads of his thumbs flicked over her pink skin and it pebbled. His voice was husky as he said, “I need to lick you, taste you, Theodora.”

Her hips rocked against him, encouraging him to fill her. But he ignored her movements. Instead, his determined fingers spanned her waist then lowered to splay over the sensitive area of her abdomen. His skilled touch sensuously transported her into a zone where there was no coherent thought.

She leaned back into him for support, her legs weak. His rock-hard length pressed into the small of her back, arousing her even more, as if that were possible. A tidal wave of anticipation flooded over her. Arching her back, she lifted her other arm to lace both hands into his thick hair. She thrust her breasts forward for more of his touch.

His hand slowly traveled up her body before he cradled both swollen breasts into one large palm. A thumb and middle finger fondled her sensitive nipples, causing her to moan and her pussy to throb.

EASY CONTEST:
For a chance to win a free download of Masquerade all you need to do is type your format preference in the comments section.

All entrants receive a free download of Cooking with Musa.

And now back to the Main Blog Hop Page.