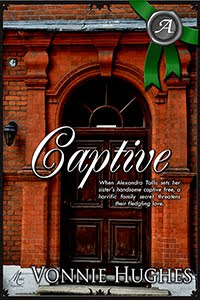 When Alexandra Tallis sets free the attractive man her sister stupidly tried to hold captive, her actions lead not only to a love she never thought to find, but also to a horrific family secret that threatens that love.

BLURB:
When Alexandra Tallis discovers that her witless sister has imprisoned their father’s nemesis, Theo Crombie in their attic, she quickly frees him, fighting an unladylike impulse to keep him as her own special captive. Despite the brutal beating she receives from her father for her actions, Alexandra continues to yearn for the delicious Mr. Crombie even though she knows that nothing will ever come of her dreams.

Injured and shackled in a stranger’s attic, Theo unexpectedly discovers the woman of his dreams. But how can he pursue those dreams when her bizarre family’s complex relationships threaten the very foundation of his existence? Somehow Theo must find a way through this maze to claim his lady.

EXCERPT:
“Oh, no, Emmaline! Please untie him. Let him go.”

Whatever would her sister do next? At seventeen, she was an eligible man’s worst nightmare. And this latest escapade—

“Don’t be such a bore, Lexie. ’Tis a great joke! For once, Papa will thank us. Especially when he finds out who it is we’ve trussed up.” Emmaline laughed her silvery, seductive laugh that drove men wild and irritated women.

“Thank us? He is more like to beat us. You cannot capture someone and bring him here and…and just tie him up!”

“Of course I can. I already have. I shall lock the two of you in here together and then raise an outcry. Papa and the servants will come running and—,” she waved her pretty hands in the air, “—the rest will take care of itself. Papa’s investment problem will be solved, and with a bit of luck, you might even be married by next week, sister.”

“Are you out of your mind?” rasped an angry voice from the darkest corner of the garret.

Alexandra Tallis gulped. She was doing her best not to look at the near-naked man half-hidden in the shadows. But her eyes refused to behave. Stripped to the waist he was a wondrous sight, all muscle and taut sinew. His arms tensed and strained as he struggled to escape.

Alexandra blinked and looked more closely, but her eyesight was not the best. She lifted a candle from the wall sconce and took a step forward. And another.

He swiveled his head to look in her direction. “Sense at last. Yes, I’m bleeding. I’d be obliged if you’d free me from these bl—these ridiculous bonds.” There was a clank and rattle as he tried to move.

Gracious! Emmaline hadn’t just tied the man up—she had chained him. Alexandra closed her eyes for a few seconds.

“Emmaline! How on earth did you manage—?”

“Davy did it for me. Well, he would fight, so Davy had to subdue him.”

“What did that witless boy do? Shoot the poor man?”

“Yes, actually. He did,” the man muttered. 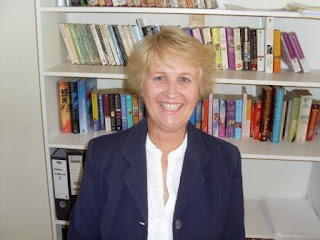 Her earlier book Coming Home is about a soldier and a nurse, thrown together during the Napoleonic wars, who find more danger on their return to England than they ever did on the Iberian Peninsula.

The Second Son is actually a prequel to Coming Home. A second son, filled with angst, stands to inherit a title and property through the death of a brother he has always loathed and mistrusted. A young disabled woman teaches him how to find his self-respect and how to love.

Another Regency Historical, Mr. Monfort’s Marriage, has businessman Matthew Monfort inveigled into marrying an earl’s daughter. With good reason he loathes the ton, so his new wife needn’t think she’s going to win him over, even though she’s quite delightful…and intelligent…and sweet…However Verity shows him that not all members of the ton are idle layabouts and that he can do much good with his largesse and with—shock, horror—the unexpected and embarrassing title conferred on him by Prinny.

All of Vonnie’s books are available on Amazon and Musa Publishing.