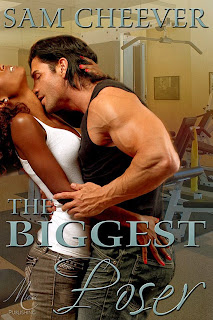 May the biggest liar win. Or die trying!

Personal trainer for the ever popular, Lose it! reality show, Jillie Maxwell is up for the most important award of her career. And she’s competing against the biggest b-eye-itch she’s ever met. Fortunately for her, she has the sexiest man alive in her corner. Problem is, each and every one of them has a dirty little secret that could tank a career.

For the contestants, the race is on to lose the most weight and win everything. For the staff of the popular weight loss show, the clock is ticking to the culmination of their lies and the possibility of losing it all.

Will the Biggest Poser win? Or will the lies just grow and grow until they sink the whole show? Only one thing is certain. Whatever happens, it’s gonna be an entertaining ride!

EXCERPT:
He was so close she could smell the clean musk scent of his aftershave and feel the moist heat of his breath. His muscular thigh flexed against her leg as he leaned in to cut a bite of asparagus.

As he lifted it to her lips, his gaze fixed on her mouth. His tongue swept over his bottom lip as if anticipating her taste. Jillie’s body tightened with need and her mouth quivered in anticipation of kissing him.

She took the spear of green off the end of the fork, sliding her tongue over her lips to get every ounce of its flavor.

The asparagus was perfect. Slightly crisp and tart with balsamic vinegar.

Brandt watched her chew and licked his lips. “I love balsamic. Let me try.”

She expected him to cut himself another bite, but instead he leaned close and slid his tongue over her slightly parted lips.

“Mmm. Delicious. I need to try the steak too.”

He cut another sliver of meat and doused it liberally with the rich sauce. As he placed it on her tongue, she drew it in, curling her tongue slowly around it, before chewing.

Brandt lowered his head and took her bottom lip into his mouth, sucking gently. He moaned. “Incredible. The sauce is exquisite. What’s your secret ingredient?”

She closed the distance between them and nibbled on his full lower lip. “There’s a reason they call it a secret ingredient.”

He slid his hand up her bare arm, over her shoulder, and wrapped it lightly around her throat, tipping her chin so he could trail kisses along the place where her blood pulsed with growing excitement. “I bet I can get it out of you.” His voice had deepened and grown husky with lust.

The sound of it abraded her overcharged nerves, making her shiver. “Just as long as you know I’m holding out as long as I can.”

He sucked an earlobe into his mouth and gently bit down. “As you know, I love a challenge.”

She gasped. When her nipples peaked hard against the soft cotton of her thigh-length T-shirt, Jillie figured he had to be able to feel them against his arm. She pressed closer, driving the painfully hard peaks into his muscular flesh. “Are you hungry?”

His lips feathered along her jaw line and lifted, stopping a mere breath away from her lips. “Starving.” Then he lowered them and claimed her mouth in an aggressive, hungry kiss.

Jillie wrapped her arms around his neck and pulled him in, draping her legs across his lap and allowing him to pull her onto the tiny chair with him. His arms enveloped her, holding her close enough to feel every hard, sexy line of his long body.

She pulled away after a moment and reached for her wine, needing to give herself a moment to cool down or she was going to lay him out in the thick grass and have her way with him right there.

She took a sip as he skimmed his hands along her bare legs, fighting the urge to spread her knees and let him in. They could so easily be discovered in that very public spot. She sipped her wine and placed it against his lips, tipping it for him to drink.

When she pulled away, a drop of wine trickled down his stubbled chin. She leaned in and swept it away with her tongue.

Brandt groaned. “I think I’ve turned permanently blue in some of my favorite parts.” 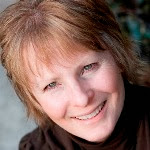 Sam Cheever's published work includes 50+ books of romantic suspense and fantasy/paranormal. Her books have won the Dream Realm Award for fantasy and The Swirl (interracial romance) Award. They've been nominated for and/or won several CAPAs, have been nominated multiple years for “Best of” with LRC and The Romance Reviews, and have won eCataromance’s Reviewer’s Choice award. Sam is published with Musa Publishing, Changeling Press; and Ellora’s Cave. She also publishes as Declan Sands, writing m/m fiction, and under her own imprint, Electric Prose Publications.

In real life, Sam lives in a cabin in the woods with 13 dogs and one husband. A self-proclaimed dog-aholic, Sam insists she's holding at 13...maybe...

Learn more about Sam Cheever on her website and blog Eclectic Insights. Stay connected on Facebook and Twitter. You can also find Sam on Goodreads, her Amazon Author Page, and About. Me.
Posted by Sloane Taylor at 12:30 AM