I am excited to announce my five Naughty Ladies of Nice books are now available in a box set from Toque & Dagger Publishing. 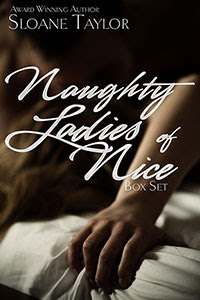 FRENCH TART Book 1
Bon Appétit...Satisfy all your cravings at cooking school.
Determined to prove herself and shed her party girl image, Donatienne Dubois pins her hope on the exclusive cooking school in Nice, France. One by one her expectations are shattered by a foul-mouthed parrot, a bogus Michelin chef, and a headmistress with a heart of tungsten steel. Donni’s lifesaver is a bad boy too hot not to handle.

Mark Anderson is incognito and hating every moment. To pose as a student while keeping tabs on a rich wild child is his version of hell, until he partners with the dish of Crème Brulée good enough to eat.

FRENCH DELIGHTS Book 2
Fantasy blooms in a garden of wicked delight.
Science is Paul’s life. Close to a major breakthrough, all he wants is to be left alone with his trees and not be forced to entertain a corporate suit. That is until the suit arrives in a sexy sundress. Now all Paul can think about is experimenting on her, not his orchard.

Lisette is less than thrilled about spending a month at a moldering chateau on the French Riviera with only some dried up old scientist for company. However the hot man in dirty jeans tending his scraggly trees proves more of a garden fantasy than the nerd in a lab coat.

FRENCH TWIST Book 3
Spies and lies bring a deadly twist to the City of Lights.
Interpol agent Claudette D’Laquois is trapped in the hellhole of life and unable to trust anyone. Desperate to regain control, she flees to the safety of her uncle’s rundown chateau on the French Riviera. But Claudette soon learns the countryside has its own dangers when she finds herself alone with a sexy foreigner.

Illegal drugs and Russian mobsters take a back seat to a lethal night of sinful pleasure for Claudette and Don.

FRENCH KISS Book 4
Who needs safe and boring when you can play with a pirate on the French Riviera?

FRENCH TICKLER Book 5
Lace and handcuffs...tools of the trade.
New Yorker Samantha Bradley has a fun, sexy career designing ladies lingerie. Now that her business is on the rise, she treats herself to a well deserved break on the French Riviera where the women are glamorous and the men are gorgeous. After a few days Sam is eager to sample more than just the local cuisine.

Cisco Bernier is France's key criminal prosecutor, but his courtroom charm falls flat outside the hallowed halls of justice. From family relationships to romantic trysts, his success rate is abysmal until a chance encounter with a sensuous young American businesswoman spins his staid world out of control.