Are You into Speculative Fiction?

Or are you not quite sure what that is? This genre includes science fiction, fantasy, steampunk and more. Musa Publishing has a dedicated line, Urania, you definitely want to check out on their easy to maneuver website.

Among their noted authors is award-winning, multi-published, Mary S. Palmer. Her new release is TIME WILL TELL. This outstanding novel is destined to be a best seller.

For those of you not familiar Mary, she writes beautiful poetry along with fiction and non-fiction books and short stories. Mary makes her home in Alabama and currently teaches English at Faulkner State Community College and Faulkner University. 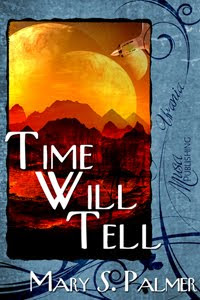 BLURB:
Reporter Mona Stewart finds herself in another world of warring factions and one of them holds the key to immortality and cures for fatal diseases.

In the inner space of outer space, an earthling, reporter Mona Stewart, discovers that living almost forever in idleness, and without challenges, is much worse than having too much to do. The only reprieve from boredom for the Svarians is outwitting the Aliens.

EXCERPT:
The car skidded, swerved sideways and spun around three times before cascading into the gully below. There were no houses on this stretch of the sparsely populated road in west Mobile County and traffic was light at one a.m., so no one saw the accident happen. The driver lay critically injured at the bottom of the ravine.

Mona Stewart was motionless. Life was rapidly oozing out of her twenty-eight year-old body. The thirty-foot drop had left the little red Volkswagen bug in one piece but all sides were damaged. It landed right on top of Mona and threw one sharp piece of window glass directly through her abdomen. The heavy rainstorm, which had contributed to the accident, continued. Blood and water formed a puddle of red liquid. Pep, her little Beagle who was also in the car, revived and staggered over to his mistress, sniffed around and began to lap at the puddle. It did not suit his taste, so he crawled under the car, snuggled as close as he could to Mona and lay down on the ground to stand guard.

In her unconscious state with her life ebbing away, Mona’s mind reviewed her existence. In flashes she relived the good and the bad, the right and the wrong, her parents’ untimely death in a plane crash, her marriage and divorce. A couple of dateless years for fear of having a failed relationship. Now, in the last hour, she had to face the discovery that her current boyfriend was no longer interested in her. He had even laughed when he left her apartment saying, “What did you expect? I promised you nothing and that’s exactly what you’re getting. There were no commitments.” She should have known this would happen. The notoriously fickle Lee Black, III, was chased by girls because of his rugged good looks and his charming, though superficial, personality. He had never been noted for his loyalty.

Nevertheless, Mona was crushed and outraged. Feeling that she had to get out of that apartment, she’d hopped in her car and sped away into the humid summer night, roaming around aimlessly, not even knowing or caring where she was. When an announcer’s voice blared out of her radio that “Hurricane Dennis is on a path headed directly for Mobile, Alabama bearing one hundred and thirty mile per hour winds; please take heed and go to a safe place—shelters are open now,” thinking that it was no match for the storm going on within her, Mona clicked off the radio. She couldn’t run from either one. Then a sudden downpour made driving hazardous. She’d never been on this road before and did not even see the curve.

Now, strangely enough, as she relived the experience in her mind, she no longer felt resentment toward Lee or anyone else who had ever wronged her. Instead, she felt a sense of forgiveness toward them. A bright light seemed to hover over her. With it came a complete sense of peace.

“Gr-rrr,” Pep growled. Then he emitted a bark that sounded more like a frightened yelp than a threat. But when two people came over to his mistress, raised the car up and lifted her out of the pool of blood, the dog instinctively knew they were trying to help her. He backed off, following as they carried her to a shelter.

Learn more about Mary S. Palmer on her website and her blog.

Posted by Sloane Taylor at 9:17 AM