FALL INTO THE MAGIC

Raine Delight is in the house with RED HOT MAGIC, book two in her awesome, paranormal Devon Falls series. If you haven’t read any of Raine’s work, you’re in for a great treat of sexy pleasure. See for yourself on YouTube and enjoy the steamy trailer for RED HOT MAGIC.

Four of the books in this outstanding series are released and waiting for you to catch the magic. There are six more in the works. Sheer joy to this Devon Falls fan. 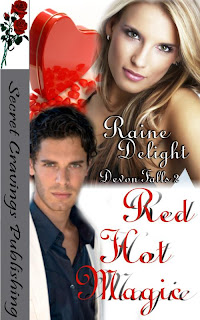 BLURB:
Raven Demarco has sworn off men after one too many disastrous dates and soon begins dreaming of a mystery man who makes her feel things that she never expects to feel again. When the auction comes closer, her sensual dreams become more than she can handle and she finds herself wishing her dream man would show up and sweep her off her feet. What will she do when the man himself comes to claim her: Heart, body and soul?

Jean-Claude LeFever is a dream walker and has searched for years for his mate and finally found her in Raven. With his seduction of her in her dreams driving them wild, he makes sure to come to Devon Falls and make her his for all time as time is running out for him and their love. If she doesn’t fall in love with him by midnight, Jean-Claude is destined to walk the planes of dreams for the next hundred years before finding his love again. Can he be able to steal her heart and make her his for all time? Or will it be too late for them?

EXCERPT:
Soon it was time for the man of the hour. It seemed the energy in the room went up a hundredfold. The women looked as if they eagerly awaited a rock star.

Raven saw from the corner of her eye, Jenna smiling at Marc craftily. They were up to something, but what was beyond her grasp at the moment. Raven turned her full attention to the stage where the most magnificent man walked amid the catcalls and cheers, so supremely handsome that he took her breath away.

That chiseled face and those bright eyes…the rock-hard body in a tux tailored to look as if made just for him…the way he walked… sex on legs, all hot and molten.

God, when he turned around, the room went in a tizzy with screams. Man, did he have a nice, tight ass. Raven almost came right then and there when she thought about how her hands would feel holding on to those cheeks. It was a perfect ass in her opinion—perfect to grab, wrap her legs around, and never let go of.

The bidding started with a furious passion, and soon it soared over a thousand dollars.

“Go ahead, honey, bid on the man!” Jenna encouraged as she practically climbed out of her seat with excitement. “The dog is so cute, with its scrunched face. The colors are amazing on the Boxer. I know how you like that breed.”
Raven blinked. The man looked right at her from the end of the runway. Gulping quickly, she raised her paddle to bid twelve hundred dollars on him.

Before she knew it, she was in a bidding war with Hailey Meredith.

The crowd roared as each bid went up even more.

Raven gulped and bid the last amount she knew she could afford and prayed as hard as she could, never taking her eyes off this man. “Three thousand dollars!”

The crowd groaned as no one bid again. As the gavel went down once…twice…three times, Raven almost fell off her chair in shock. The gavel rang down as sold…to her!

Stunned disbelief raced across her face as Jean-Claude came down the stairs, with Jeb. He looked at her and smiled a slow, sexy grin all too familiar…yet he was still a stranger.

Oh my god! I just won that sex god!

Learn more about Raine Delight on her website and her blog. Keep in step with her on facebook and her Author/Reader Loop. It’s one you’ll enjoy.

I’ll be back Wednesday with a new menu. Until then…
Happy Reading!

Posted by Sloane Taylor at 9:22 AM