Into Mystery or Suspense? How About Zombies?

If so, then DEAD RECKONING, the debut novel by Paul Stansfield, is the book for you.

For those readers not familiar with Paul and his work, he was born and raised in New Jersey, and graduated from Rutgers University. He works as a field archaeologist. When Paul’s not excavating prehistoric sites or exhuming graves, he enjoys writing, mostly in the horror/thriller/suspense genres. 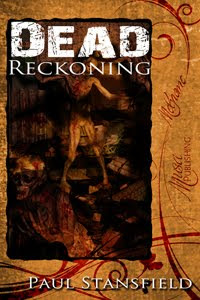 BLURB:
This time, the zombies aren’t the bad guys.

Kurt Minnifield is a fledgling actor playing a zombie in a low budget horror movie. The director and crew decide to move their shooting to lovely and isolated Watkins State Park...only they don't get proper permission.

Victor Newsome is a thirteen year old trying to both shed his nerdy image and learn outdoor skills at a special survival camp. After teaching the boys how to make shelter and kill their own food, the counselors decide to take a day trip to the neighboring state park--Watkins.

A series of ethical lapses, poor decisions, and bad luck lead to a colossal misunderstanding. Violence erupts as both sides fight desperately against a dangerous set of foes. Who will be more savage--the literal "monsters," or the boys equipped with deadly weapons, and the knowledge of how to use them?

EXCERPT:
Kurt struggled to catch up as the unknown actor continued to track the other zombies. Now he saw that the other actors must have seen or heard the guy—they’d turned around and were advancing on him. The guy wasn’t anyone he recognized, either, this was definitely somebody new. So what happens now? No one had any special effects gear, so unless this man ran away the unscripted shooting was over.
The actor wasn’t fleeing. He raised his gun and aimed it at the zombie in front, Will. His hand shook for a second, and then he fired.

The crack of the shot was loud, and Kurt nearly fell over in shock. That was no blank! That sounded real! What the fuck? Blood was running from a hole in Will’s chest. Kurt gasped. Will had been the last zombie to be made up before Kurt—he was positive that T.J. hadn’t put any squibs on him.

Will had stopped, and his zombie claws went to the wound, and he stared at the hole wonderingly. The zombies nearest him—Tabby, Henry, and Ed, all dropped their arms down and were staring at Will too, and then back at the mystery man with astonished expressions on their faces.

The guy hesitated, and then raised his gun a little, and fired again. There was a second boom, and then Will’s eye broke up, followed almost immediately by the back of his head. Blood, and pieces of whitish skull and grayish brains splattered out, onto the forest floor. Will fell on his side with a strange gurgling sound.

Holy Shit! thought Kurt. That was no squib either. This was real! This guy is psycho! He watched as Tabby took off, into the bushes to the side of the clearing. Henry and Ed crouched by Will’s body, and struggled to communicate with the alien assassin. They waved their arms wildly, trying to signal “Stop” with their palms held up. Their grunting was noticeably louder, but still inarticulate.

The armed man paused a moment more, and then aimed once again. The two zombies tried to duck behind Will’s slumped corpse. Two shots whined past, and then a third hit Henry in the shoulder. Just then he whirled in Kurt’s direction and fired again, just as Kurt threw up his hands. As soon as the gunman turned, Ed and Henry were in the bushes right behind Tabby.

Fire rushed through Kurt’s left hand, just above the wrist. He groaned as he saw blood, and tendons, and even bone through the hole in his mangled hand. He dove to the ground, just as another bullet hit a tree right where his head had been. And then he was gone, tearing through the bushes and trees almost without looking.

The man trotted up to Will’s body, and kicked at it curiously. He looked briefly at the spot where the hand-shot zombie had disappeared, and then he turned back and went after the first three zombies.

Learn more about the interesting life of Paul Stansfield on his blog.

I’ll be back Wednesday with a new Easter menu. Until then…

Posted by Sloane Taylor at 8:05 AM