Inspiration Behind the Book

Too may times. One time is too many. 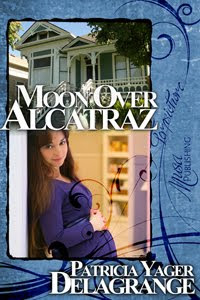 This question had burned in my mind for years and I wanted to write about it. People have asked me how I can write about something that’s never happened to me. I counter with: I write fiction. All fiction writers tell a story they’ve made up in their heads. But they imbue that story with their own feelings. Which is what makes a good book. And I have a wealth of feelings that I used when I wrote Moon Over Alcatraz. I have two children. I know what it’s like to love two human beings unconditionally, with no reservations. My kids often ask me, “Do you love me, mom?” And my answer is, “Always and forever.”

So I took a happily married couple, excited to have their first child, placed them in the delivery room, and had the umbilical cord wrapped around the baby’s neck, which produced a still birth.

And that’s pretty much what happened to that couple - their lift stood still. They didn’t know how to move on from there. Instead of looking to each other for solace and renewal, they turned away from each other. Both of them, unbeknownst to the other, dealt with their grief in a way that broke them apart, instead of pulling them together.

Losing a child is devastating. And each person deals with that emotional turmoil in their own particular way. I’d go so far as to say that no one can predict how they would act in that circumstance. Emotions can be unpredictable, surprising even to the person who’s experiencing them. This is what happens to Brandy and Weston. You have a difference in their emotional upheaval. One character is the mother who carried her baby to term, and the other is the father who didn’t have that same physical experience.

BLURB:
Following the death of their baby during a difficult birth, Brandy and Weston Chambers are grief-stricken and withdraw from each other, both seeking solace outside of their marriage; however, they vow to work through their painful disloyalty. But when the man Brandy slept with moves back to their hometown, three lives are forever changed by his return.

EXCERPT:
Three days later we were standing at the edge of a hole in the ground at Holy Sepulcher Cemetery in Hayward, the silence so thick, the insides of my ears buzzed like a distant swarm of angry bees. Mr. Peralta and another gentleman stood off to the side while Weston and I held hands next to a tiny casket.

Weston had chosen a simple mahogany box with gold handles, a bouquet of white lilies graced the top of the small box. I knelt down and laid a kiss on the smooth wood then wiped off the tears that had fallen on top. Weston joined me, placing a single red rose in the middle of the lilies.
He helped me up and we stood side-by-side in silence, my guilt over her death like a stone in my empty belly. I missed everything I’d dreamed would be happening right now, yearned for all that could have been.

Weston nodded at the man standing next to Mr. Peralta and our baby was slowly lowered into the gaping maw. She reached the bottom, and a bird landed on the rich brown dirt piled next to the grave. It pecked around, chirping a little song then flew off - as if saying goodbye. My heart squeezed inside my chest.

I picked up a small handful of soft dirt. “Goodbye, Christine,” I whispered, throwing it on top of her casket.

Weston wrapped his arm around my waist and pulled me in close to his side. Why her? Why my baby? Was this supposed to make sense? And, if so, to whom?

We drove home in silence. No words existed to express my grief.