I'm excited to introduce you to a prolific author who never ceases to amaze me. Marci Boudreaux has a sexy new release you definitely want to read. Several times. 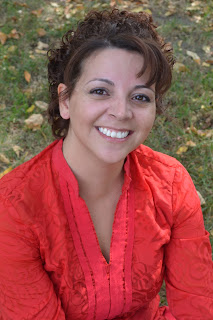 I wrote The Messenger just over ten years ago. I was still riding high on winning third place for unpublished manuscript in a Texas Writers’ League contest. Unfortunately, the world didn’t love the book as much as I did. After numerous rejections, I put it on the shelf and only recently pulled it off to give it another go.

It needed lots of work. Let me say that again: It needed A LOT of work!! Head hopping, showing not telling, repetitive writing…just to name a few.

But I was determined, so I cleaned it up, offered it up and it was accepted by Secret Cravings Publishing. I knew it still needed more polishing and scrubbing, so I turned to some great author friends—Vonnie Hughes, Parker Kincade, and yes, even our beloved Sloane all had a peek at it—to help me get my head on straight and attack this as an editor instead of a sentimental writer.

With their help I was able to rework this story that I’ve loved for so long into something that I hope you will love too! 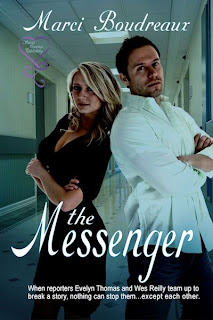 Evelyn Thomas is tired of being treated like a little girl playing dress-up. Just because she is working at her father’s newspaper doesn’t mean she isn’t a good journalist. All she needs is a chance to prove it.

Unfortunately for seasoned reporter Wes Reilly, that chance turns out to be the exact same story he’s working on.

When the journalists get separate leads on the same insurance scam, they butt heads over who gets to expose it. However, when Eve’s source ends up in ICU she has no choice but to turn to Wes for help.

Every step they take brings them closer towards the truth and each other. But the path to vindication is filled with danger and leaves Wes and Eve struggling to get out of sticky situations and fighting for their lives.

EXCERPT:
Eve ran her hand along one of the many rows and skimmed the file tags until she got close to the numerical prefix she was looking for. She pushed the files as far apart as the overstuffed shelf allowed and tilted her head down to get a closer look. She went over each name, not finding any files which corresponded with names on the list Jerry had given her.

This was impossible, like finding the proverbial needle in a haystack. She pulled a piece of paper from her shirt pocket to verify the spelling of the name before she pushed the folders apart again in case she had missed what she was looking for the first time.

Suddenly a hand roughly grabbed her shoulder. She spun around, her heart racing and her lungs tight with the gulp of air she had involuntarily inhaled. As soon as she met the angry gaze of the man who had startled her, she let her breath out with a rush and sank against the wall of folders.

Wes pressed his lips together and flexed his jaw muscles as he stared at her. “What are you doing here?”

She looked at the white coat he was wearing with a badge which identified him as Dr. Henderson. “What are you doing here?”

Wes leaned down to get eye-to-eye with her. “Answer me, Thomas.”

“I don’t have to share my stories with you.”

He snorted as he leaned back. “Exactly what story would that be? How to properly file medical records?”

She felt the sting of his words go straight to her heart. Defiance set in and she stood a little straighter. “Insurance fraud.”

Wes stared at her for several seconds. He may have been trying to intimidate her, but his glare had nothing on her father’s. She simply cocked her brow in return.

Eve shook her head. “No. I got this tip on my own, Reilly, and if you think you’re going to steal it away from me—”

“Steal it away from you? I’d like to know where you got your tip ’cause I’ve been on this story since last week. You are so unbelievably—”

Eve raised her brows when he stopped mid-sentence and turned his head away. “I’m so unbelievably what?”

“Shut up,” he breathed. Her mouth opened and Wes put his hand over her lips. “Hush.”

Eve gasped when she was quiet long enough to hear footsteps. She grabbed his wrist and pulled his hand away. “What do we do?”

Marci Boudreaux lives with her husband, two children, and their numerous pets. She is a freelance writer and video producer for a variety of local monthly magazines as well as a content editor for several small publishing houses.

Romance is her preferred reading and writing genre because nothing feels better than falling in love with someone new and her husband doesn’t like when she does that in real life.

Marci is currently working on her Masters in Publishing and has plans to eventually take over the world.