Time to Wrap It Up

The Magnificent Men of Munich saga draws to a close with book four. Yesterday's Lovers brings us Rhineholdt Hoffman, a man who has yet to realize his inner strength, and Isabella Carrington, an heiress who always gets what she wants. 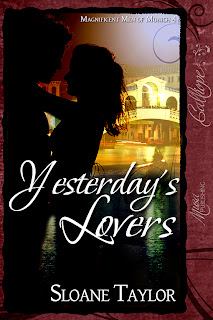 Isabella Carrington has everything a pampered heiress wants, except for the most important item - love.

BLURB:
No matter how many designer items she buys or men she conquers, Isabella Carrington never seems to find what she’s looking for. When she meets the one man in the world completely unaffected by her charms, she is determined to have him, even if it means a dunk in the Grand Canal.

Rhineholdt Hoffman has sworn off women after a destructive relationship alienated him from everyone and everything he loved. Now on self-imposed exile in Venice, Holt lives a solitary existence until a wild French Canadian shakes the staid accountant to the core and makes him question his beliefs.

Issy and Holt are forced to come out of the past and face their future as they set the Venetian nights on fire. Especially after an odd turn of events and an old gypsy have them wondering if they were yesterday’s lovers.

EXCERPT:
Heat coiled through Isabella with Holt’s firm hands holding her in place. All those lonely nights she had spent thinking about him stroking her breasts, plunging inside her vagina, driving her closer to orgasm, raced through her mind. The fantasies had been sweet torture, but nothing compared to reality. Sacre bleu! She needed to ride him and end this torment. He had been the true reason she stayed on after the wedding. The hope of having him in her bed for the weekend had been worth a dunk into the canal.

The oval mirror above the sink gave a perfect reflection of her hand clamped tightly on his ass. He pulled open the glass shower door and she trembled with anticipation.

He twisted on the faucet, then slid her down his body, his hard-on pressing against her abdomen. A volley of shivers arced up her spine as she cupped his face.

“You are too impatient, Schatze.” He turned her around and rested an arm under her breasts, holding her in place as he adjusted the water.

She rubbed her butt against his zipper.

“I have waited a long time for you, Holt, and I have no intention of missing this bon opportunity.”

He turned her to face him and teased his palms over her tight nipples.

“Do you feel well enough to do this?” He skimmed a finger down her bruised cheek. “I do not want to hurt you?”

“Non, mon chér, you will not get out of this so easily by using a few dark spots as an excuse.” She squared her shoulders, striving for tough, but failed when her laughter bubbled up at his expression. “Remember? I have been a tres bad girl.”

“You are sure?” His lips trailed a path of fire down her throat to the scooped neckline of her silk robe.

“Never more of anything in my life.” She caressed the dark brown stubble on his chin, the short bristles crisp under her touch. He raised his head, his eyes smoldering. She traced his full lips with her thumb, then glided her tongue across their seam. He pulled away before she could plunge in.

“Nein, Isabella, I thought you had learned the other day, I am the one in control.” His voice thickened.

“Then I must be the submissive?”

He nodded, determination gleamed in his eyes.

She tapped his chin. “You do know the submissive has all the true control.”

He shook his head, a puzzled expression furrowed his brow. Her words were clearly alien to him.

“Oui, mon chér. The sub is the one who stops it all when they say the safe word.”

He looked up, his brown eyes blanked over. “But what if the dominant does not comply?”

Had she misread him? A chill whisked up her spine. Isabella liked sex—loved it, in fact—but she did not like pain. Of any kind.

“Why would you not stop if I told you it was too much?” She had to get this straight or there would be no playtime with the man who set her juices flowing. Instead, she would be on a jet to Canada that very afternoon.

I'll be back Monday. Have a wonderful weekend!

Sloane
Posted by Sloane Taylor at 8:50 AM