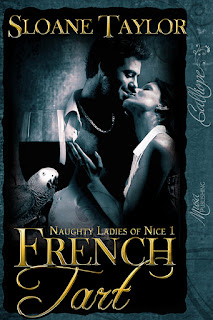 Determined to prove herself and shed her party girl image, Donatienne Dubois pins her hopes on the exclusive cooking school in Nice, France. One by one her expectations are shattered by a foul-mouthed parrot, a bogus Michelin chef, and a headmistress with a heart of tungsten steel. Doni's lifesaver is a bad boy hunk too hot not to handle.

Mark Anderson is incognito and hating every minute. To pose as a student while keeping tabs on a rich wild child is his version of hell, until he partners with the dish of Crème Brule good enough to eat.

PG EXCERPT:
Mark pasted a cheery smile on his face. Hell, he was getting the hang of this cooking stuff. He tipped the mountain of cheese piled on his platter and leaned closer to the stove, eyeing the pan that looked too small to hold it all.

“Stop!” Doni held up her tiny hand. “You cannot toss all that in here.”

He stumbled backward. What the hell? He’d done exactly what she told him. She couldn’t blame him because the damn block of cheese grated up to Matterhorn size.

“Are you sure you’re in the right cooking school?” She threw in a handful of the white shreds and shuffled the pan until one side of the omelet flipped over the other.

“Are you sure it’s cooked?” He pointed at the pan. “Looks kind of pale to me.”

“Are you sure you know anything about food?” She glared at him while wiping her slender fingers on a striped blue towel. “This is the easiest dish we’ll prepare. What’s going to happen when we advance to boeuf à la mode and present it?”

Now she had him on this present thing, let alone whatever the hell kind of food she meant. If it even was food.

“No problem. I’m your man and ready to step up to the plate.” Dammit. How stupid was that, to make a baseball reference? Quick, change the subject. “What’s next?”

She handed him a coffee cup.

Good, a caffeine jolt would go good about now.

“Ah, sure.” He gingerly took the mug, wondering what the hell she expected of him.

“These”—she waved a handful of limp skinny green sticks at him—“are chives. From the onion family.” She shook her head, then slid the omelet onto an oval platter. When he didn’t move, she slapped a pair of scissors into his palm. “Do I have to do it for you?”

“You don’t have to be insulting.”

“I apologize.” She tossed her head to move a thick strand of hair from her cheek. He looped the blonde lock around his finger—pure silk—then curled it behind her ear. Her breath quickened and his heart swelled. He leaned into her, needing to taste her pink lips. The sweet aroma of flowers filled his lungs.

Before he could say anything, Chef edged between them.

“Interesting.” Chef took the platter from Doni. “Perhaps a bit plain, do you not think?”

She gasped when he grabbed a handful of some chopped green thing and plopped the wad on her omelet, obliterating the light-colored food.

He dropped the plate back into Doni’s hands and strolled on to the next pair of fledgling chefs.

Doni blinked rapidly as she pressed her lips tight. Mark slung an arm around her shoulder, feeling guilty as hell that he’d done nothing to stop...

Have a wonderful weekend. I'll be back Monday with SS Hampton Sr.. Until then...

Posted by Sloane Taylor at 9:02 AM