This dynamic sci-fi noir is written by speculative fictioneer Milo James Fowler and is a MUST READ. Makes a great holiday gift, too. 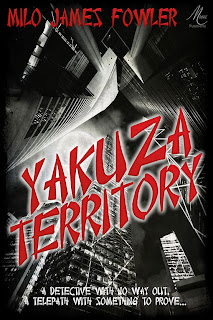 A detective with no way out. A telepath with something to prove...

World-weary detective Charlie Madison has seen more than his share of war. When he stops by the 37th precinct late one night to check on his old friend Sergeant Douglass, the place is as quiet as a morgue. The last thing he expects to find: half a dozen Russian gunmen with a score to settle.

What starts out as a vicious Alamo-style battle soon evolves into something more sinister as Madison's past comes into play. Will his ties to a branch of the Japanese mafia be a help or a hindrance? And who is the strange man in holding? Why are the Russians determined to break him out?

Struggling to survive the night, one private eye must rely on his wits to solve a mystery where he's outnumbered, outgunned, and trapped inside a police station with a soulless killing machine.

EXCERPT
Maybe checking in on Sergeant Douglass late that night hadn’t been the best idea. I should have paid more attention to the warning signs right off; things weren’t exactly business as usual at the precinct. The pencil-necked clerk wasn’t at his post, and an eerie quiet held the foyer as still as a morgue. No cops, uniformed or otherwise, to be seen. In a city that never slept, one expected its law enforcement personnel to share the same god-awful insomnia—graveyard shift or no.

The vacant front desk didn’t sway me from my course, though. Little glitches out of the ordinary seldom did. I’d trained myself over the years to file them away, but not focus on them too much. As a detective, it was easy to get distracted by particulars while going after the big picture. Besides, I was suspicious by nature. I questioned everything as a matter of course. But as far as I knew, everybody on duty was partying in back, throwing Douglass a well-deserved soirée after his recent ordeal and return to the land of the visible.

I paused at the unlocked door leading into the bullpen—an open-concept area with clusters of desks for everybody ranked lower than lieutenant. Access into the station’s inner workings wasn’t usually so free and easy. As I quietly stepped inside, I knew without a doubt something was amiss.

The whole room lay empty except for five guys standing in the middle with assault weapons slung over their shoulders—AK-12s and SIG MPXs by the looks of them. Not what your average citizens usually carried around concealed on their person.

“Hey.” I saluted the first one to notice me. “Am I late to the party?”

He glared my way, and I couldn’t help feeling like I was back in high school; once again, I’d forgotten the beer. They weren’t in uniform—unless black nubuck jackets and jeans counted, not to mention the scruffy stubble, slick hair, and stocky frames. Come to think of it, that’s pretty much the look of your standard-issue thug for hire these days.

I would have recognized that Scottish brogue anywhere. I’d already assembled a good enough picture of the situation to know it was in my best interest to hit the floor a split second before the deafening staccato of weapons fire and a hail of bullets headed my way. The rounds blasted straight through computer monitors and potted plants on desks; sparks flew upward along with shards of clay and clouds of potting soil. Chairs disintegrated as I cringed behind a solid steel desk and drew the snubnosed Smith & Wesson from my shoulder holster.

“Sarge, you all right?” I barely heard myself over the stampede of slugs plowing into the steel that sheltered me. The rounds were making some serious dents, but none had punctured through—yet. It was only a matter of time. I wouldn’t be able to stay put for long.

Milo James Fowler is a teacher by day and a speculative fictioneer by night. When he's not grading papers, he's imagining what the world might be like in a dozen alternate realities. He is an active SFWA member, and his work has appeared in more than 90 publications, including AE SciFi, Cosmos, Daily Science Fiction, Nature, Shimmer, and the Wastelands 2 anthology.

Learn more about Milo James Fowler on his website. Be sure to join The Crew for updates about new releases as well as exclusive promotions.