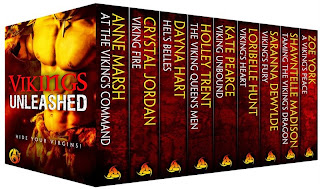 AT THE VIKING’S COMMAND by New York Times and USA Today bestselling author ANNE MARSH. A werewolf tries to protect her Pack and ends up in the arms of a ruthless Viking. Following her Viking’s orders ignites a fiery passion and fulfills her secret fantasies, but can she claim her Viking for keeps?

VIKING FIRE by award-winning author CRYSTAL JORDAN. Wolf-shifter Erik once betrayed the only woman he ever loved, the shieldmaiden Bryn, and it cost both their lives. Now, they serve the gods as immortal warriors, and an ancient prophecy forces them together to try to stop the coming apocalypse. What they don’t expect is for the fire to burn as hot between them as ever.

HEL’S BELLES by DAYNA HART. Hela’s one-night stand is assigned to mentor her through the creation of her new motorcycle club, but as their relationship starts to develop, the secrets she’s keeping might cost her everything.

THE VIKING QUEEN’S MEN by award-winning author HOLLEY TRENT. As the newly installed queen of an enclave of telepathic Viking descendants, Tess is the final arbiter of conflicts. Unfortunately, the very first one she has to resolve is in her own bedroom. Two men would fight to the death to win her, but to gain full control of her considerable power, she must find a way to keep them both.

VIKING UNBOUND by New York Times and USA Today Bestselling Author KATE PEARCE. Encased in ice, traveling through space and thousands of years adrift from his world, Viking Einarr Bloodaxe can’t help but respond to the call of his female and finally break free of his magical entrapment.

VIKING’S HEART by national bestselling author LORIBELLE HUNT. Jolie Hall is ready for her life to change. Being given to a Viking to clear her father’s debts isn’t quite what she had in mind, however. She can’t deny she’s drawn to Stone Ulfson, but can she believe his claim that she is his destined mate?

VIKING’S FURY by award-winning author SARANNA DEWYLDE. Magnus the Destroyer will do anything to escape prison planet Hel and punish his captors, including taking the warden’s innocent daughter Mercy as collateral. Only after they crash on an uninhabited planet, Magnus learns some things are more precious than vengeance.

TAMING THE VIKING’S DRAGON by SHAWNTELLE MADISON. Only two riders can command an ice dragon…Drifa wants nothing more than to complete her training as a Woman of the Frost, but she is called to help destroy an evil force fallen from the stars. Three years ago, she left Steinn behind. To fight this new foe, they must forget their differences and reunite as man and woman. But for two Viking warriors, waging war is easier than forging peace.

A VIKING’S PEACE by NYT Bestselling Author ZOE YORK. Thrown together in an intergalactic diplomatic mission, Reinn and Ashleigh know they must fight the burning attraction between them. But this Viking has finally found his mate, and nothing else matters.

Available at Amazon
Posted by Sloane Taylor at 12:30 AM