Get Toastie with Lizzie T. Leaf 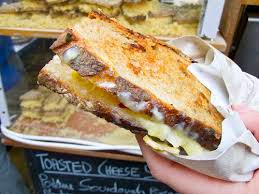 I received the instructions for this sandwich several years ago on a trip to Borough Market in London. The lady on the grill at the Kappacasein stand talked with me as she grilled up morsels of yum and told me how to make the gooey delights. When we returned home and I attempted to duplicate the sandwich that has us all drooling, including the two granddarlings who were with us on the trip, the first efforts weren’t so great. But time and patience has worked. The secret is slow and easy cooking. You want the cheese to melt and ooze out and the bread to become brown and crispy before you’re ready to indulge. It’s probably a good thing I don’t live in London because I could see this becoming a weekly addiction for me.

As for the making of the sandwich, it’s about the bread and the cheddar. Start with sourdough bread cut into sandwich slices. They used shredded Montgomery cheddar and say the complexities are one of the reasons the sandwiches are so good. Montgomery is hard to come by here (and expensive). Check your grocery store for an aged farmhouse cheddar cheese that has a nutty taste and is sold by the block or wedge.

They also had a container of finely chopped white onion, red onion, leeks, and crushed garlic at the ready.

To make the American version of the Borough Market Cheese Toastie do the following:

Place a thick layer of shredded cheddar on a slice of sourdough bread. Add a teaspoon or two of the chopped mixture per sandwich, then slap on the top slice of sourdough. Grill according to the directions below.

Electric Grill: Lightly oil and heat. Place sandwich on the grill and cover. Cook for about three minutes or so. You want the cheese melted and gooey, the bread nice and toasted.

Panini Pan: Same as above. The best is the best method to make this delicious sandwich.

Grill Pan: Same as above but place a frying pan with several cans in it (for added weight) on top of the sandwich.

The closest cheeses I was able to find to make these delicious sandwiches were:

Studs and I fell in love with this combination and have enjoyed the meal several times now. I believe you will, too.

Here are the original directions for this dynamite sandwich: 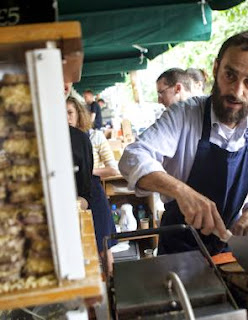 Assemble the sandwich and place it in a hot, lightly greased griddle pan (assuming you don't have a Panini toaster. Place a frying pan on top of the sandwich and weigh it down with a couple of cans.

Cook it for about 3 minutes until the crust starts to brown and the cheese melts through the pores of the bread. Flip it a couple of times so it cooks evenly, but make sure you don't overcook it, or you won't be able to taste all the flavours.

The result is one the finest aromas your nostrils could ever hope to savour, emanating from Kappacasein’s Swiss raclette - a generous helping of melted Ogleshield on a pile of new potatoes, baby gherkins and pickled onions - and its toasted cheese sandwiches, made with Montgomery cheddar, onions, leeks and garlic on Poilâne sourdough.

Now that you're done cooking, sit back with your favorite beverage and sandwich and check out a lively read from my Magic series. 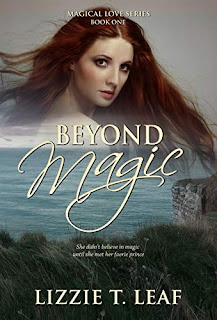 Following the Powers directive to unite soul mates, a Scottish Cailleach's magic will have repercussions in several realms.

Mixed-blood author Ian McCabe, grandson of Fae and gods, tries to deny his powers while hiding his true origins from the human world. When he discovers mortal woman unconscious on his front door steps, his world starts to change.

Tour director Emma Grant signed on to lead a group of senior ladies through Scotland. The breakdown of their bus on a rural Scottish back road has her sloshing through the rain and mud on foot. Her efforts to seek help results in a fall that knocks her unconscious. She awakens to find the man of her dreams staring into her eyes.

Both feel an instant attraction but will a trouble making faerie, his secrets and her distrust of men keep them apart. 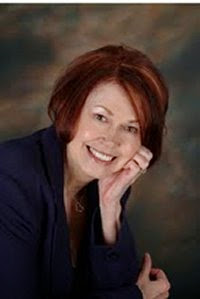 Lizzie T. Leaf loved books since she opened her first one. Her dream was to write them herself. Lost in the hectic day to day world of family, job, laundry and housework, writing became a distant memory. When the twinkling ember did spark, it was usually doused by someone demanding their share of her time.Lizzie's life went full circle. The desire to put the stories that continued to play in her head on paper emerged stronger than ever, and at a time when there was someone who encouraged. Now she lives her dream.

See all of Lizzie's book on Amazon.
Posted by Sloane Taylor at 9:04 AM