A PLATE of YUM

There comes a time when my family longs for traditional “comfort food.” This is a recipe passed down through the generations and is one of our favorites. I hope you enjoy! 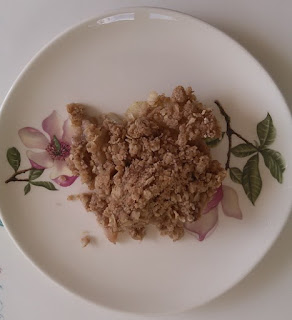 Cut up pears and layer in a baking dish.

Combine butter and brown sugar with a fork in a medium-sized bowl. Add oats, flour, and cinnamon. Use the fork to stir until mixture resembles coarse crumbs.

Use a tablespoon to sprinkle mixture over fruit.

Bake 15-20 minutes, or until fruit is tender when pierced.

For an extra treat serve vanilla ice cream on top of the crisp.

While your home fills up with a tasty aroma, indulge yourself with a good book. May I suggest one of the books from my LitRPG series The Revelation Chronicles? ?